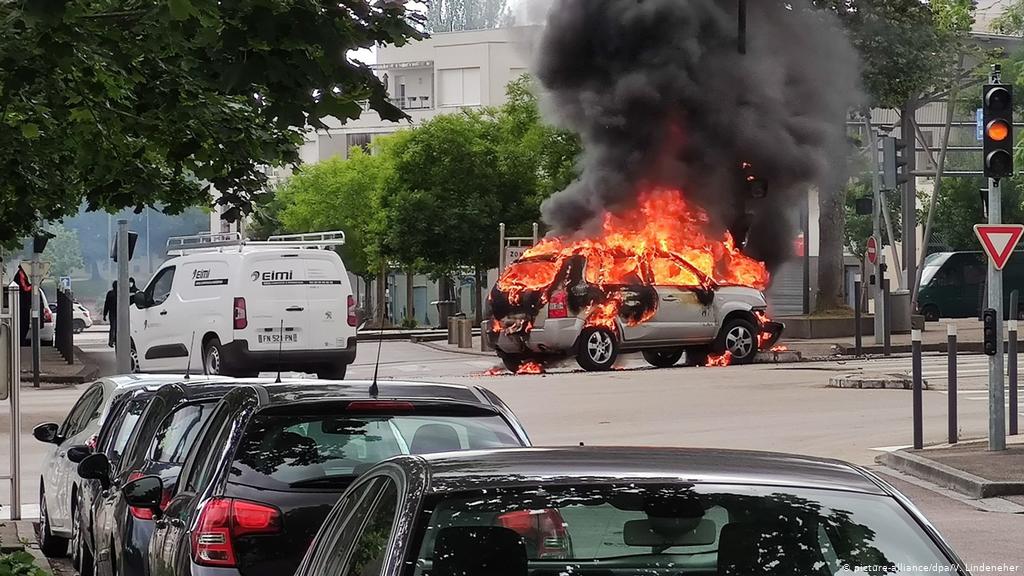 In the city of Dijon in the east of France, gang violence between Chechens and Arabs has been raging for four straight days, with the clashes resulting in numerous individuals wounded, cars and garbage cans in the suburb of Grésilles being set on fire, and masked attackers destroying security cameras.

The French government has vowed to stem the violence and sent elite police units into the normally placid French capital city of Burgundy to stem the escalating conflict.

The unrest was reportedly sparked following an Arab drug dealer’s attack on a 16-year-old Chechen boy, leading to hundreds of Chechens descending on the French city from across France, many armed with assault rifles, bats and machetes, according to Czech news portal Echo24.

The massive open clashes between armed migrant gangs in the streets is perhaps one of the largest such displays that Western countries have ever seen. As evidenced by numerous videos posted to social media, the sound of gunfire has been echoing across the city for days, and there is no clear indication how many dead or wounded there truly are due to the French police forces’ inability to access certain areas of the city.

In the suburbs of Grésilles, not only were cars and garbage cans burning, but masked attackers also destroyed security cameras. Gunfire could be also heard and the videos show masked gunmen with Kalashnikov-style rifles, pistols, and iron rods.

Smoke rises to the sky as the sound of AK-47s firing can be heard across town.

Imagine having to raise your child in such a country? pic.twitter.com/ihfBAxAz8t

The police, who are holding back, have so far arrested only four people, all of whom have refugee status, and sent reinforcements to the scene, the BBC reported. According to a number of security sources, the police do not have the problem under control at all.

“Wonderful multiculturalism! New video of the shootings between immigrants in Dijon, a city without law. People are terrified. They are bands of Algerians and Chechens who have clashed with baseball bats and iron bars,” wrote one user on Twitter.

Violence was condemned by Mayor François Rebsamen and the French Interior Ministry. President Emmanuel Macron called on the Interior Ministry to expel all violent criminals from the country.

Following reports of an Arab drug dealer violently beating a 16-year-old unidentified Chechen male, Chechens spread the information on social media. Chechens immediately mobilized and gathered in Dijon not only from other regions of France but also from other European cities. During the weekend, barricades began growing in the neighborhood, and cars were set on fire. Several people were injured and one was shot.

Here’s a better angle for the ongoing battle between algerians and chechen gangs in #dijon (france)
Looks like an ction movie lol pic.twitter.com/vfL9SCOAvg

The Chechens mostly targeted the large north African minority neighborhood that resides in the low-income district of Grésille.

France’s police union wrote on Twitter, “Given the detonations heard on site, they are not only using Airsoft. They are preparing for a learning and cultural holiday. You should ask @JLMelenchon and his friends if the police must go unarmed and carry out identity checks?”

The police union was referring to calls from politicians to disarm the police in France, a point that officers have roundly criticized given the firepower available to many criminal groups.

With the breakdown of a French city into open ethnic warfare between migrant groups, French authorities are racing to contain the damage of such a high-profile incident could have both economically but also politically for the government.

The socialist mayor of Dijon, François Rebsamen, even hinted that police were partly to blame for not providing “justice” soon enough.

“Because justice comes too late and the police do not have the means to act, the Chechen community has come to enforce its own rights. But we are no longer living in the Republic when that happens,” Dijon mayor François Rebsamen told Le Bien Public daily.

Laurent Nuñez, Secretary of State for the Interior, arrived in Dijon to meet with local police. Originally, he wanted to visit the district of Grésilles but decided not to do it in the end.

He condemned “very serious, intolerable acts” and noted that “in France, justice is administered by the state, the rule of law. No one can enforce justice by himself,” Nuñez said.

President Emmanuel Macron has instructed the Interior Ministry to expel foreigners and migrants who have committed violence.

“If foreigners participate in a breach of public order, we will systematically examine the possibility of their expulsion in accordance with administrative and, where appropriate, judicial procedures,” the ministry responded in the evening.

The prefect of Bourgogne-Franche-Comté Bernard Schmeltz defended the lax approach of the police as the only practical strategy for dealing with groups that are heavily armed.

Marine Le Pen, head of the National Assembly (formerly the National Front), hastily arrived in Dijon and said that “we no longer know if we are in the Wild West or Baghdad.”

She tied the armed conflict in the city to migration and wrote on Twitter, “Moratorium on immigration, tax investigations on suspicious wealthy lifestyles, dismantling of mafia networks, expulsion of foreign criminals: We must reclaim the lost territories of the Republic!”

About 200 protesters were waiting for Le Pen in front of the hotel where the press conference took place, and in the end, the police had to disperse them with tear gas after clashes with police broke out.

According to the former member of Jacques Chirac’s government Philippe de Villiers, a pre-civil war broke out in Dijon.

“Politicians have created colonies of barbarians here,” he added.

France has also seen violent clashes break out in Paris during Black Lives Matter protests in the city.

In Lyon, a dozen individuals assaulted an off-duty police officer and his wife after one reportedly recognized him and screamed, “I’ll f*ck you up, dirty cop.” Four suspects were arrested after the attack that increasingly underlined the perilous situation police are facing in the country.

Title image: French police officers are seen during a training session in Nice ahead of the G20 summit of Cannes, southeastern France, Monday, Oct. 31, 2011. G20 leaders will gather in Cannes for the final summit of France’s presidency Nov. 3 and 4, 2011(AP Photo/Michel Spingler)