Frontex to help Lithuania struggling with an influx of migrants

“The Lithuanian border is our common external border and Frontex is ready to help where needed,” said Frontex CEO Fabrice Leggeri 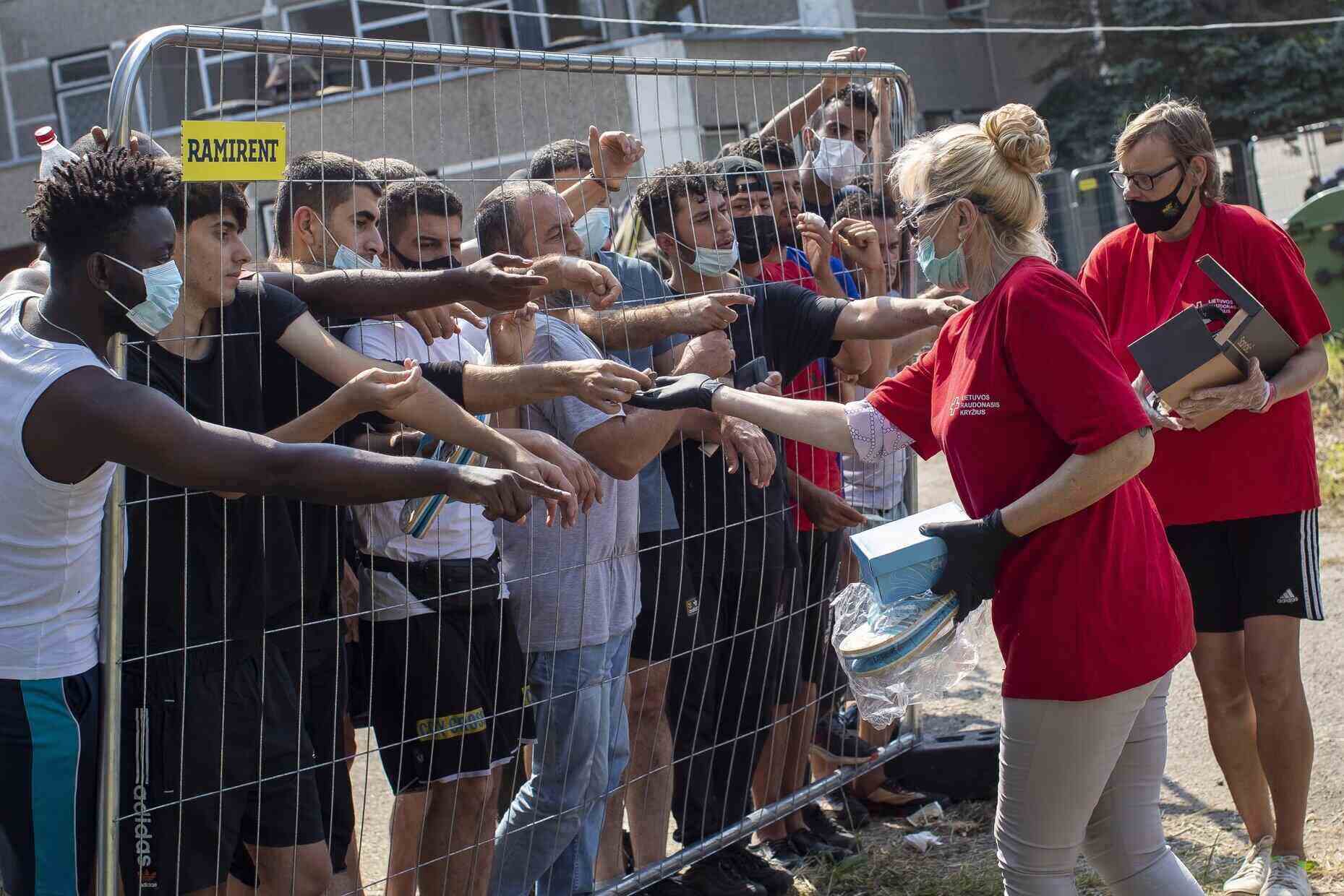 Lithuanians sell things to migrants standing behind the fence at the refugee camp in the village of Verebiejai, Lithuania, Sunday, July 11, 2021. European Union member Lithuania has declared a state of emergency due to an influx of migrants from neighboring Belarus in the last few days. Lithuania's interior minister said late Friday that the decision, proposed by the State Border Guard Service, was necessary not because of increased threats to the country of 2.8 million but to put a more robust system in place to handle migrants. (AP Photo/Mindaugas Kulbis)

The EU Border and Coast Guard Agency (Frontex) intends to take further steps in the coming days to help Lithuania, which has recently been facing a strong influx of migrants on its border with Belarus.

“The Lithuanian border is our common external border and Frontex is ready to help where needed,” said Frontex CEO Fabrice Leggeri after Saturday’s meeting with Lithuanian President Gitanas Nausėda.

The Frontex operation on the border between Lithuania and Belarus started a few days ago and involves over ten border guards with patrol cars. However, the agency said that their number would more than double this week. In addition, Poland will send a patrol helicopter to Lithuania and there is also talk of deploying a helicopter from Germany.

Moreover, Lithuania will open a new camp to house migrants who have recently arrived in large numbers via Belarus.

„This week we will open a camp in (village) Dieveniškés, which can house 500 people,“ said the Minister of the Interior Agné Bilotaité. According to a ministry spokesman, the facility will be located around an unused school building and will later be expanded by tents or temporary shelters. It will be located in the Lithuanian promontory, which is for the most part surrounded by Belarusian territory and is connected to Lithuania by a 2.5-kilometer-wide strip of land.

„The remoteness will make it easier to ensure the safety of people and migrants,” said spokeswoman Lina Laurinaityte.

Lithuanian Foreign Minister Gabrielius Landsbergis called on the European Union to consider imposing further sanctions on President Alexander Lukashenko’s regime in response to the influx of migrants from Belarus. According to him, Minsk uses migrants as a “political weapon” and a means of pressure on the EU. The 27-nation bloc imposed the sanctions on Belarus for, among other things, human rights abuses and the violent repression of protests that erupted after last year’s contested presidential election. Later, the sanctions were extended.

Lithuania, which has given refuge to many Belarusian opposition politicians, accuses its neighbor of sending people across borders, mainly from Iraq and other Middle Eastern countries, or from Africa. The AP states that in the last two months, more than 1,500 people have crossed the border from Belarus to Lithuania illegally, which is more than twenty times compared to last year.

Belarusian President Alexander Lukashenko said a few days ago that his country would not close its borders and become a “camp for people fleeing Afghanistan, Iran, Iraq, Syria, Libya, and Tunisia.” Lukashenko also claims that his country will stop cooperating with the EU on migration in retaliation for sanctions.