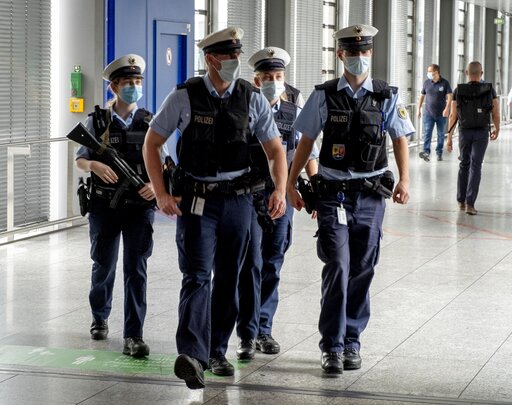 The German state has spent over €5 million guarding just one Syrian migrant in the small German village of Bitterfeld, with the man believed to be such a serious terrorist threat that he has required a 24/7 police presence for the last three years.

His presence in the village, located in the German state of Saxony-Anhalt, has left inhabitants presented with a bizarre sight almost every day. When the 19-year-old Syrian Ayman N. wants to go shopping in town, four plainclothes police officers must follow him with two vehicles a few meters apart.

He is not allowed to leave his accommodation any further than the supermarket and all his movements are tracked with an electronic ankle cuff on his leg.

According to data obtained by German news outlet Magdeburg Volksstimme, 95,000 man-hours have been accumulated by officers guarding the Syrian man. At an hourly rate of €52 per civil servant, that amounts €5,000 every day and over €5 million in total. The staggering figure does not even include vehicle costs or other material resources, as this data is not yet included in the overall tally.

Four officers are currently required for surveillance per shift, which amounts to 12 officers per day, with most of them coming from the German city of Magdeburg.

This bizarre situation has been in place since 2017, with critics of the arrangement pointing to it as another cost of Chancellor Angela Merkel’s decision to allow over one million migrants from the Middle East and Africa to enter Germany in 2015 and 2016. The fact that police resources are being devoted to the man to the exclusion of other issues has infuriated German police unions.

“We cannot watch him forever. This permanent monitoring ties up forces that are urgently needed elsewhere,” echoed Peter Meißner, who serves as the head of Association of German Police Officers (BDK).

The stated reason behind the extreme surveillance is the young man’s designation as an active Islamist terrorist threat. He is currently waiting for his trial to continue before the Berlin Supreme Court.

Instructions on how to manufacture a Kalashnikov

In August 2017, the Halle district court initiated surveillance of Ayman N. based on the belief that he was “preparing for a serious, state-endangering act of violence”.

The ISIS sympathizer, who entered the country as a refugee listed as an unaccompanied minor in autumn 2015, lived in the Osternienburger Land until January 2017 and made contact with like-minded people on the Internet.

According to the prosecution, he obtained instructions for the manufacture of an AK 47 (Kalashnikov) assault rifle and also asked in a chat about where to obtain weapons as well as asking about how to make an explosive suicide belt. Furthermore, the Syrian confessed to an undercover constitutional protection officer that he was planning “something bigger”, including an attack in Berlin.

After the third day of the closed hearing in September 2017, the regional court declared that it was no longer responsible for Ayman N. and referred the case to the Berlin Regional Court based on new allegations regarding his membership in a foreign terrorist group.

However, the Berlin Court of Appeal also temporarily suspended the proceedings after the fourth day of hearings in December. Court spokeswoman Lisa Jani said that “follow-up investigations were still required”

The general public prosecutor in Naumburg is now responsible for the case, and says the around-the-clock “surveillance” is required given the threat-level of the Syrian migrant.

The German Interior Ministry refuses to comment on the case.