Several illegal migrants who tried to cross the Polish-Belarusian border were in possession of photos of child pornography, zoophilia, decapitations, and materials proving connections with terrorist organizations and Russia 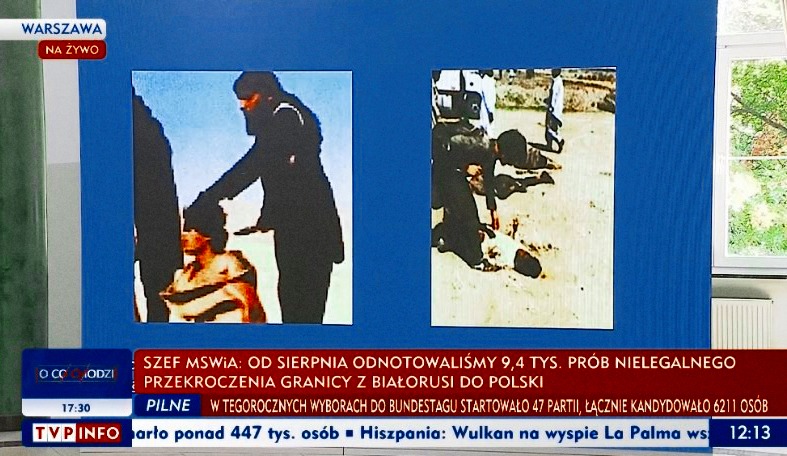 Findings of about 10 percent of the migrants show possible connections with terrorist organizations, crime and human trafficking (source: TVP Info/MSW).

Migrants at the The Polish minister of national defense and minister of the interior held a joint press conference on Monday concerning the current crisis associated with illegal migrants from the Middle East who are trying to forcefully cross the Polish-Belarusian border.

“This is not about stigmatizing anyone but about facts which show exactly what kind of people are forcing our border. We must share these findings with public opinion and inform of the provocative behavior of Belarusian services,” Minister of the Interior Mariusz Kamiński stated.

Spokesperson of the Minister-Special Services Coordinator Stanisław Żaryn indicated that the identities of several hundred illegal migrants who are currently detained in Border Guard centers have been verified, according to a report from TVP Info. All of these migrants also underwent thorough verification procedures.

Twenty percent of the investigated had connections with Russia, which often went back several years into the past. During interrogations, the migrants tried to hide their identities and information. Polish services also identified evidence of the migrants participating in pedophilia and zoophilia activities.

Żaryn presented photos from an SD card that was found by Polish officers on one of the migration routes. Although its owner remains unknown, the card possesses photos which show, for example, meetings between different terrorist groups, such as the Islamic Jihad Movement in Palestine.

“A shocking conference by the ministry of defense, ministry of the interior and the Border Guard concerning data gathered about certain migrants who illegally reached Poland from Belarus. On their phones they found executions, terrorism, pedophilia, zoophilia, and connections to Russia.”

Other photos taken from an Afghani citizen show a series of executions through decapitation, as well as the bodies of the murdered.

Some photos showed connections of the migrants with Russian territory. An Afghan who was apprehended spent much of his time in Russia prior to reaching Poland through Belarus. He said he desired to reach Germany.

The phone of an Iraqi citizen had child pornography saved on it, while another migrant’s phone held zoophilia photos.

In light of this evidence, Stanisław Żaryn informed that at least two-thirds of the migrants who have been detained have connections to illegal activity, which is sparking among Polish authorities.

Moreover, Polish officers have also increasingly often found proof that Belarusian authorities are giving illegal migrants psychotropics to allegedly help them survive the illegal border crossing. The Lithuanian side has passed on information that Belarusian officers had given one group of migrants methadone, a strong opioid substance.