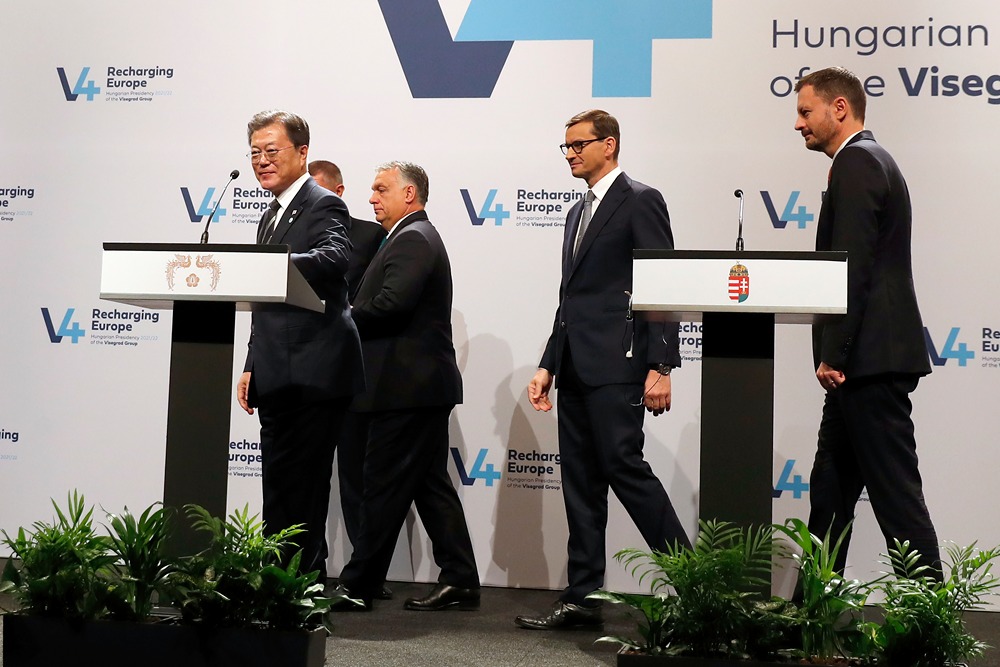 On Thursday, a summit was held in Budapest between Visegrád Four (V4) prime ministers and President of South Korea Moon Jae-in. Following the meeting, Polish Prime Minister Mateusz Morawiecki underscored that the Visegrád Four nations of Hungary, Poland, Czechia, and Slovakia are South Korea’s most important partners in the EU.

“Close to 30 percent of Korea’s total export to the EU enters V4 countries. We are open economies, and we expect such openness from our partners,” he said.

He emphasized that the trade exchange with Korea has been growing at an incredible pace in the last few years and is the foundation for long-term economic growth.

Morawiecki explained that trade exchange is particularly important to Poland in areas related to innovation, the future of the Polish economy, and the development of automatization and robotization. He praised cooperation with Korea in the areas of electric battery production and the chemical industry.

The leaders also discussed global challenges which he said must be faced together. In this context, Morawiecki pointed to climate challenges and the rising prices of gas, emphasizing Russian Gazprom’s manipulation of the gas market.

During the summit, the leaders spoke also on issues such as “massive migration” related to Afghanistan, Iraq and the crisis on the Polish-Belarusian border. Morawiecki evaluated that the Visegrád Group’s migration policy was “the mainstream policy towards migrants in the EU.”

Morawiecki added that V4 countries have warned the EU about Russia’s dangerous game of gas blackmail, whose victim is the entire EU. “From this position, we would like to call upon the European Commission to very thoroughly check what Gazprom’s price manipulations have been about, as well as their manipulations associated with the European Union Emissions Trading System,” he said.

“We want to live in peace with our big neighbors, and we want to build good conditions for trade and economic exchange in a difficult geopolitical situation,” he stated.

Morawiecki emphasized that the cohesion of the V4 and its will to cooperate with important partners such as South Korea proved its strength and establishes positive outlooks for the upcoming years.

“Trade, science, and know-how strengthen cooperation between the V4 and South Korea when it comes to difficult challenges associated with the climate, migration policy, and the geopolitics surrounding us,” he said.