Poland’s president uses his speech at the United Nations to address Belarus, Russia, Ukraine, and the Covid-19 crisis 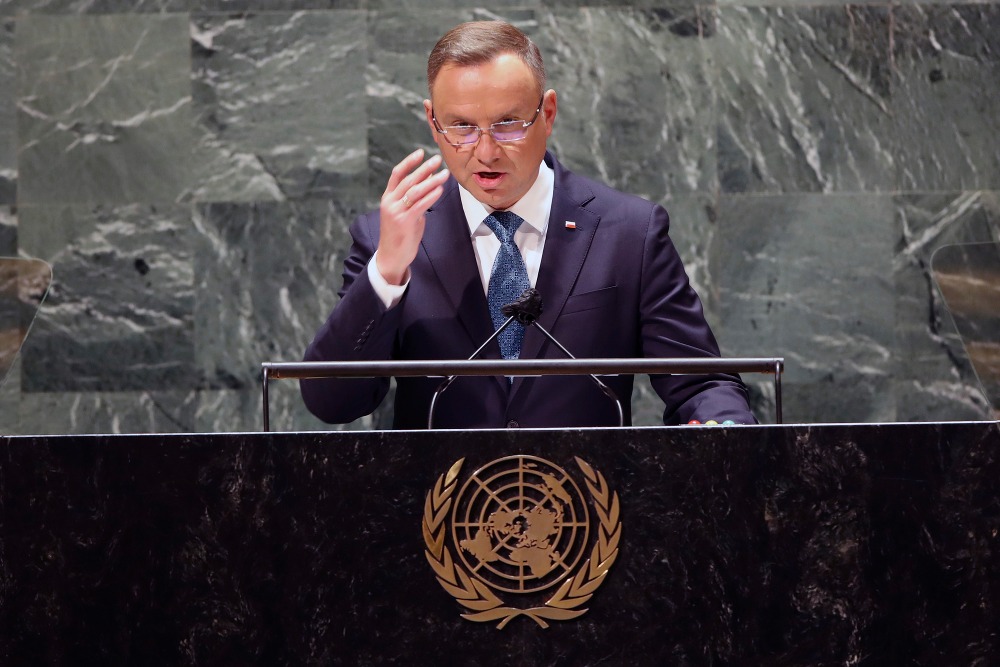 At the 76th United Nations General Assembly, Polish President Andrzej Duda accused Alexander Lukashenko’s government in Belarus of carrying out an attack against European Union and NATO Eastern flank countries, as well as using illegal migrants as a weapon.

“For many weeks Belarus has been bringing in tens of thousands of desperate Middle Eastern inhabitants who under the threat of physical abuse are forced to cross our borders to create an artificial humanitarian crisis. These people are then stranded on the border and the regime is deaf to our offers of humanitarian aid. Those migrants are treated like pawns in a political game; their dignity and basic rights are being insulted,” Duda said.

The president emphasized that the Belarusian regime was carrying out a hybrid attack against Polish, Lithuanian and Latvian borders. He declared that these countries would not back down during this crisis as they did not agree with abusing the difficult situation of migrants to target the security of borders.

Duda also stood up for the rights of those in the Belarusian opposition and Polish minority activists in the country, with Duda naming both Andżelika Borys and Andrzej Poczobut as examples. He demanded the immediate release of all political prisoners in Belarus.

In this crisis, we will not succumb because on our part, there is no agreement to instrumental treatment of migrants, no agreement to the abuse of their vulnerable situation pitched against the security of our borders; the borders we have a duty to protect, also as a member state of the European Community guarding its border.

In his speech, the president also referred to the pandemic and its effects on the world. He noted that while the Polish economy managed to return to its dynamic growth, 2020 was the first year since 1990 during which it had not recorded any growth.

Duda also questioned whether the wealthy countries of the world had displayed enough solidarity during the pandemic.

“Did humanity behave as it should have in the battle with the virus? Did we help each other as is expected by humanity’s basic moral instinct? I have doubts about this,” he said.

The president asked whether the rich North, including Poland, had shown necessary solidarity with the poorer countries of the South. He did, however, underline that Poland had supported many other countries with its humanitarian convoys and by sending millions of vaccines to those in need.

Moreover, Duda explained that the pandemic had drawn attention away from other dramatic events, such as the war in Ukraine. He pointed out that the war had not ceased during the pandemic and thousands of people have died as a result of Russian aggression.

“What was the reaction of the wealthy North towards the drama of the Ukrainian nation fighting for its independence? It was the construction of Nord Stream 2 through which Russian gas will be transferred to Western Europe and bring billions to the aggressor. It was complete powerlessness and even ambivalence to the fact that Ukraine is in even more danger today,” he stated.