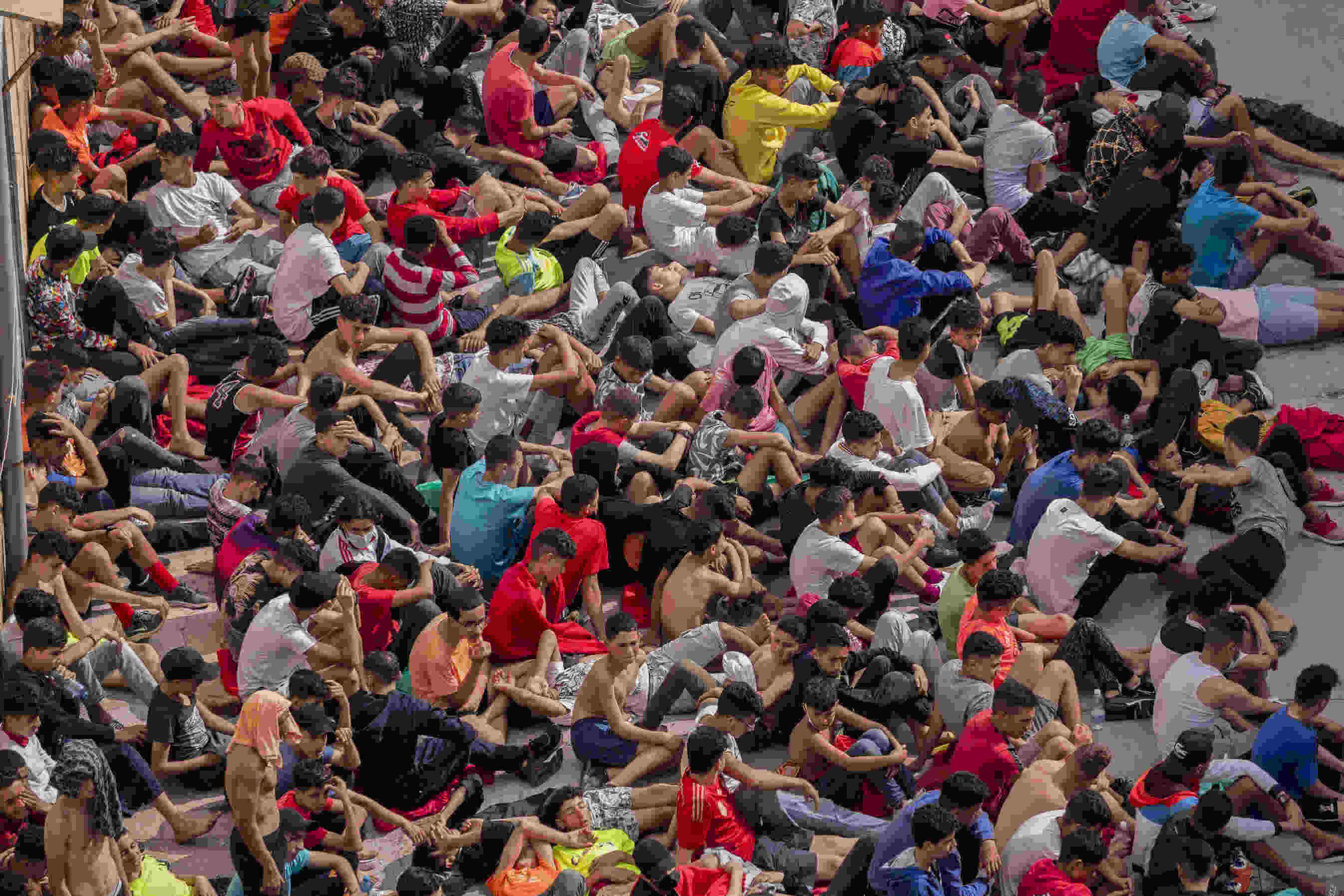 The Spanish enclave of Ceuta continues to face an influx of migrants from Morocco. The city on the North African coast currently does not know what to do with hundreds of minor migrants and tries to reunite them with their relatives.

Hundreds of children and teenagers have been placed in local warehouses and parks after Over 8,000 migrants arrived last week in an area of seven square kilometers. Among other things, they were motivated to take the journey, which they often took on inflatable boats or just as swimmers, by reports that Moroccan customs officers had relaxed border surveillance. At least two people died in an attempt to cross the border.

At least 7,000 migrants have already been repatriated back to Morocco, according to Spanish authorities. However, according to officials, there are still 438 children and teenagers in Ceuta who have arrived unaccompanied by an adult. In reality, however, there may be even more juveniles, as social workers continue to comb local streets, deserted areas, and parks.

“We are working to solve the problem regarding children who have arrived on their own,” said Spanish Social Affairs Minister Ione Belarra. “It’s important to realize that we see children here who are much younger than usual. Sometimes they are also children aged seven, eight, or nine,” added Belarra.

Local authorities have turned some of the local warehouses into detention facilities, as the current ones are completely full. Visitors to these facilities had to undergo a ten-day quarantine under police supervision. Several juveniles who managed to slip out of the facility complained about poor conditions. According to them, they did not receive hot food for several days and due to the lack of beds, many of them sleep on the floor.

However, according to local media, most migrant minors in the city spend the night in parks or on the streets. They often have no money and there is a lack of adult supervision. Local authorities are asking for help from the Spanish government and the Spanish regions.

“We can’t do it, there are too many children,” city councilor Carlos Rontome told public radio this week.

The city has set up a special line to help families reunite. According to city officials, dispatchers received 4,400 calls on the first day alone.

“The goal is to reunite minors with their families as soon as possible. We understand the worries and anxieties of many families who do not know where their children are,” stated the local councilor Mabel Deu. According to her, the line’s employees work day and night to help desperate relatives find their loved ones. Under Spanish law, minors remain in the care of regional authorities until their relatives are found or until they reach the age of majority.

However, according to social workers, some minors want to stay in Spain.

“They know (parents) that if I get here, I can have a future,” the AP quoted the fourteen-year-old boy as saying.

“You see that your parents can’t work, that the education system is very weak,” the young man described life in Morocco.

The non-profit organization Save the Children called on the authorities to address possible repatriations of children on a case-by-case basis.

“Before the repatriation, it is essential that the authorities ensure that this decision is safe and appropriate for the child’s development and rights,” the organization said in a statement.

Save the Children has been joined by Amnesty International.

“Amnesty reminds the authorities that they must ensure that the best interests of the child are protected in all cases and that these young people must be able to apply for international protection, if appropriate,” the organization said.

“Morocco is playing with people’s lives,” said Virginia Alvarez of Amnesty International. “They must not use people, including their citizens, as pawns in their political game,” Álvarez said while criticizing the Moroccan government.

According to the Spanish media, Madrid’s decision to provide medical care under a false identity to the leader of the separatist organization Polisario Ibrahim Ghali, led to the Morroco’s liberalization of the regime at the mutual borders. The leader of the rebels in Western Sahara, who are seeking independence from Morocco, has been admitted to a hospital in Logroño after Ghali became infected with COVID-19. Madrid defends its move by saying that the reasons for the treatment were “strictly humanitarian”, wrote El País.

Morocco promised to hold a referendum on self-determination in 1991, but this has not yet happened. In recent years, however, Morocco’s international support has grown. In December, the United States became the first of the Western democracies to recognize Morocco’s claim to the territory. According to the Guardian, this was part of an agreement by the Donald Trump administration aimed at normalizing relations between Morocco and Israel.

Title image: Unaccompanied minors who crossed into Spain are gathered outside a warehouse used as temporary shelter as they wait to be tested for COVID-19 at the Spanish enclave of Ceuta, near the border of Morocco and Spain, Wednesday, May 19, 2021. Social services for the small city perched on an outcropping in the Mediterranean buckled under the strain after more than 8,000 people crossed into Spanish territory during the previous two days. (AP Photo/Bernat Armangue)