Refugees from Ukraine, who have a so-called toleration visa, could soon work in Czechia without a work permit 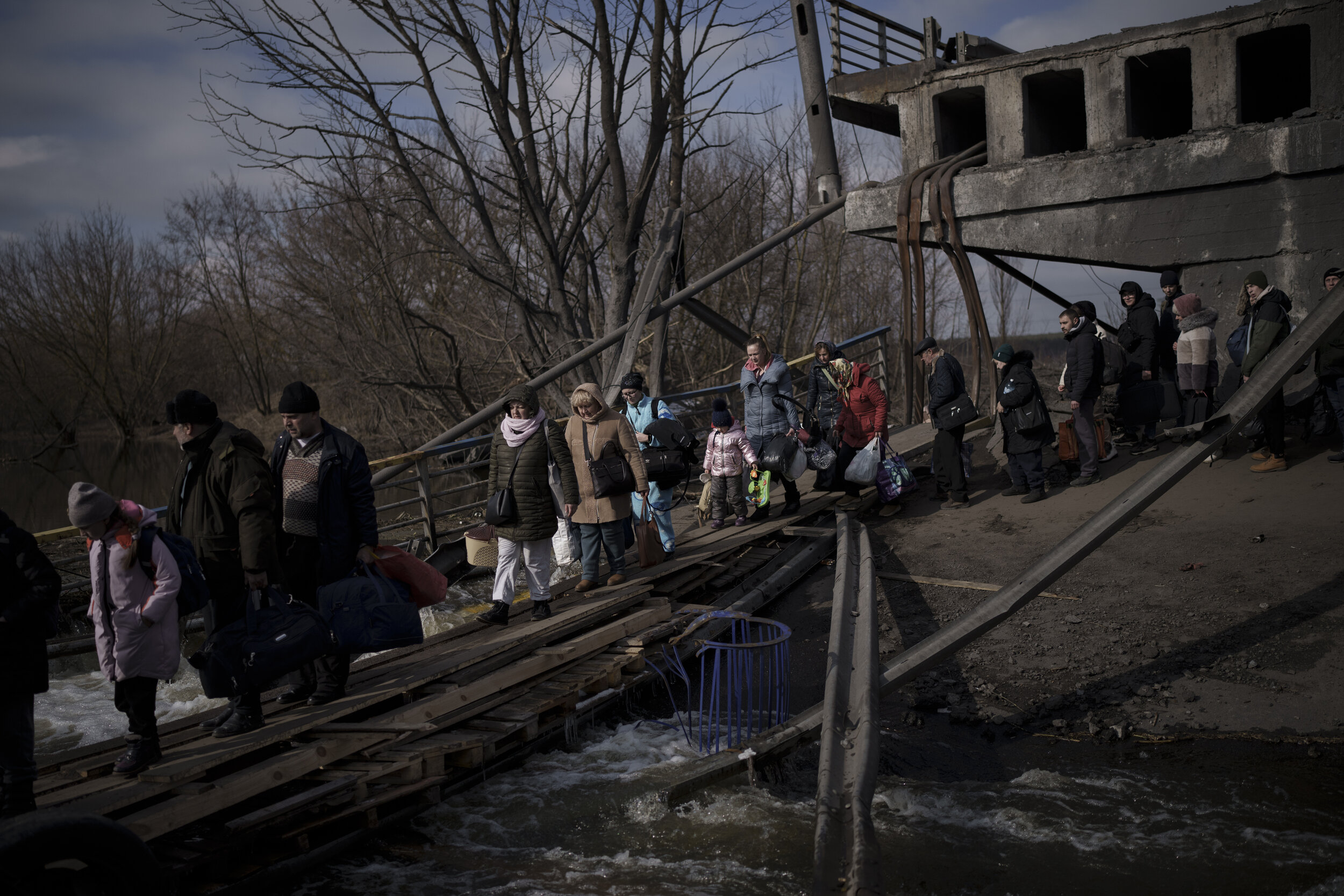 Ukrainians cross an improvised path under a destroyed bridge while fleeing Irpin, on the outskirts of Kyiv, Ukraine, Wednesday, March 9, 2022. (AP Photo/Felipe Dana)

More than 100,000 refugees have arrived in Czechia from Ukraine as the country continues to manage new arrivals every day, Prime Minister Petr Fiala revealed on Tuesday.

Fiala indicated that Czechia can handle 250,000 refugees, but the country would be strained with higher numbers.

According to the Czech leader, the country must now decide how best to proceed, with Interior Minister Vít Rakušan announcing that the government wants to extend the deadline for the registration of refugees, in addition to guaranteeing accommodation for those in need and further strengthening the country’s social system.

Czechia and other countries receiving refugees from Ukraine will be able to apply for money from a special U.S. fund designed to support countries who offer aid in the “humanitarian, military and other sectors.”

“Together, the entire package should be $6.4 billion to help Ukraine,” said Jennifer Bachus, an American chargé d’affaires in the Czech Republic, during a visit to the assistance center in the town of Pilsen.

“We need to prepare for the fact that there will be more and more refugees from Ukraine due to the continuing Russian attacks. We are ready to help these people. So far, we can manage,” Fiala said before leaving for London to meet with U.K. Prime Minister Boris Johnson and fellow Visegrád Group leaders.

After the congestion and temporary closure of the Prague refugee center, authorities are reportedly attempting to direct Ukrainian registrants to other, less busy cities, Fiala revealed, while Rakušan called for all refugee trains to bypass Prague and head to other regions.

Rakušan announced that registration for newcomers with the foreign police should be extended from three to 30 days, and revealed that the government would discuss this proposal on Wednesday. The Czech interior minister also reiterated that for the Czech Republic to be able to provide basic comfort to visitors and find accommodation for them, the country can accept around 250,000 people.

According to the minister, a proposal should be made for the possibility of Ukrainian children entering pre-school education, adding that it would also be necessary to define the price for accommodation within the regional accommodation capacity per day.

“Of course, it will not be a profitable amount, but a cost sum. We can cover the acute situation by the end of March. Then, we will have to come up with some longer-term system solution,” Rakušan explained.

Plans are also afoot for the government to review the current social system to assist destitute Ukrainian refugees with benefits provided by the state to help towards housing costs.

Rakušan revealed that the capacity of state lodging is already exhausted in many places, and refugees are finding that they must stay in private hotels and boarding houses.

Refugees from Ukraine, who have a so-called “toleration visa,” could also soon work in the Czech Republic without a work permit and could also participate in retraining. A draft of a new relevant law will provide for this, legislation that trade unions argue must also include protections to prevent the abuse by unscrupulous businesses of refugees as a cheap source of labor.

Lastly, the Czech government has confirmed that the current refugee wave has not exacerbated the country’s Covid-19 pandemic situation. The number of positive cases has not increase, according to the country’s health ministry.

The Czech Vaccinological Society has recommended the re-vaccination of children and adults from Ukraine who cannot provide proof of the completion of mandatory vaccinations.