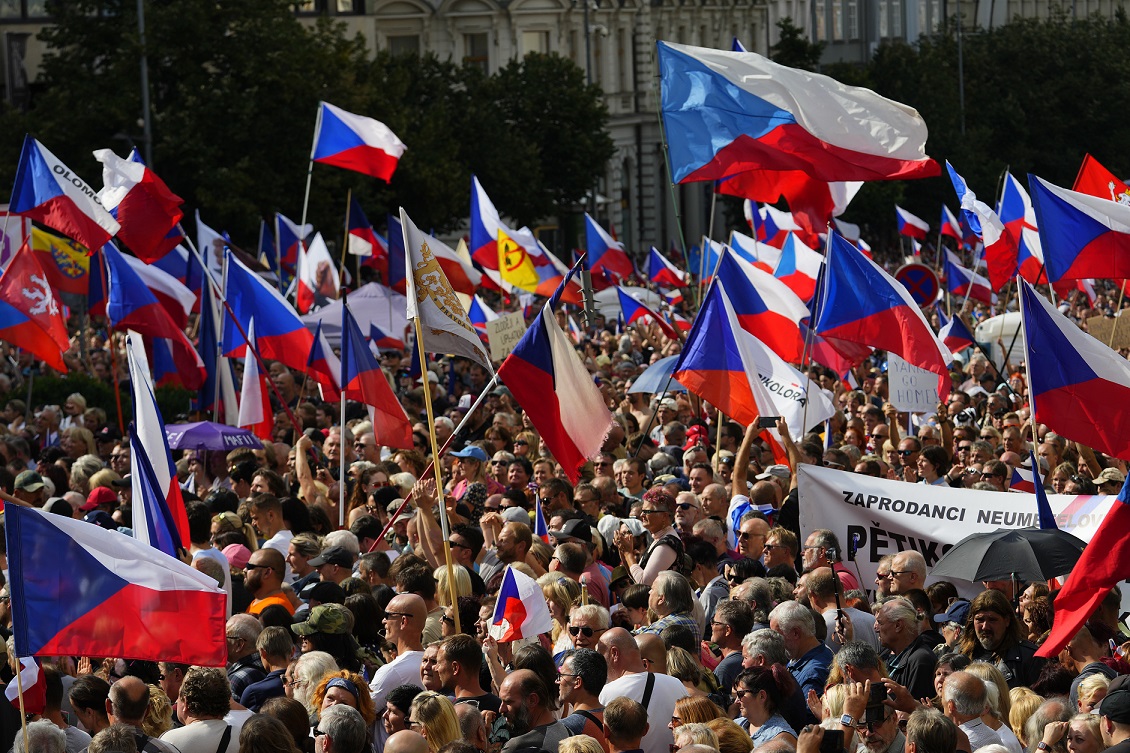 On Saturday, an estimated 70,000 people protested in the Czech capital city of Prague calling for an end to energy sanctions on Russia and neutrality regarding the war in Ukraine. The protest underlines the growing anger over the cost-of-living crisis in Europe as inflation explodes higher, and with other protests already scheduled in other European countries like Germany over the coming months, Europe’s protest movement may only be beginning to heat up.

In a country as small as Czechia, with its population of 10.7 million, the police estimate of 70,000 protesters represents a significant turnout. The equivalent of such a protest in Germany, with a population eight times the size of Czechia, would be 560,000 people marching in the streets.

During the protest on Saturday, people filled Wenceslas Square in Prague, with many waving Czech flags, banging drums, and unfurling banners that read, for example, “Aid for Ukrainians and two sweaters for us.”

The crowd also chanted “Demise” and “We’ve had enough” in reference to their desire for the government to resign from power. People prepared slogans against the EU, NATO, Prime Minister Petr Fiala, the Green Deal for Europe, and the government’s rejection of Russia, Novinky.cz news outlet reported.

“The Czech Republic needs a Czech government. Fiala’s government may be Ukrainian, perhaps Bruxellois, but certainly not Czech,” said Zuzana Majerová Zahradníková, the chairwoman of the Tricolour party. According to her, the government should reduce taxes, including VAT, and end anti-Russian sanctions that harm Czech businesses. She is also demanding a halt to the supply of weapons to Ukraine.

As inflation spirals higher in Czechia, many have grown disillusioned with the government’s aggressive support for Ukraine.

“The aim of our demonstration is the necessity of change, mainly in solving the issues of energy prices, especially electricity and gas, which will destroy our economy already this autumn. We invited Mr. Fiala to negotiate with us, but unfortunately, we have had no answer. So, we will continue to push for this government to end. We will demand its resignation,” said event co-organizer Jiří Havel.

“This is not our war,” she said, according to Czech news outlet Irozhlas.

Czechia, like many European countries, is now dealing with an energy crisis that is expected to worsen over the winter months. As a result, the protest movement could balloon in the autumn and winter if the situation worsens.

In Germany, the Left Party (Die Linke) has organized a protest against government policies and rising inflation, which is set to take place today, Sept. 5, in Leipzig. In addition, the Alternative for Germany (AfD) is organizing a protest on Oct. 8 in Berlin under the title “Nord Stream 2 instead of gas levy.” AfD has accused the government of sabotaging German industry to support a U.S. proxy war against Russia, with the party arguing that German families and businesses will pay enormous costs. Both the Left Party and AfD have argued against sanctions on Russia and an end to weapon shipments to Ukraine.

Although some have warned of mass protests over the winter due to rising energy prices, according to Süddeutsche Zeitung, Germany’s domestic intelligence services does not anticipate violent mass protests in connection with the Ukraine war, possible energy shortages, and high inflation.

However, the scale of possible future anti-state protests cannot be reliably predicted at the moment.

“It is the job of the Office for the Protection of the Constitution to monitor whether legitimate protests are being hijacked by enemies of democracy for their own purposes,” said Thomas Haldenwang, president of the Office for the Protection of the Constitution. However, that is not the assessment of everyone, with Stefan Kramer of the Thuringia branch stating that “what we have experienced so far during the coronavirus pandemic in the form of violent clashes on social networks, as well as in the streets and squares, was likely more of a kids’ birthday party” compared to what could be expected from coming protests over the winter.

Although the Left Party and AfD do not wield significant political power in Germany, the AfD has seen a slight increase in its polling numbers as of late.