According to French territorial intelligence, a new wave of protest in the style of the Yellow Vests movement is to be feared with the introduction of the health pass. 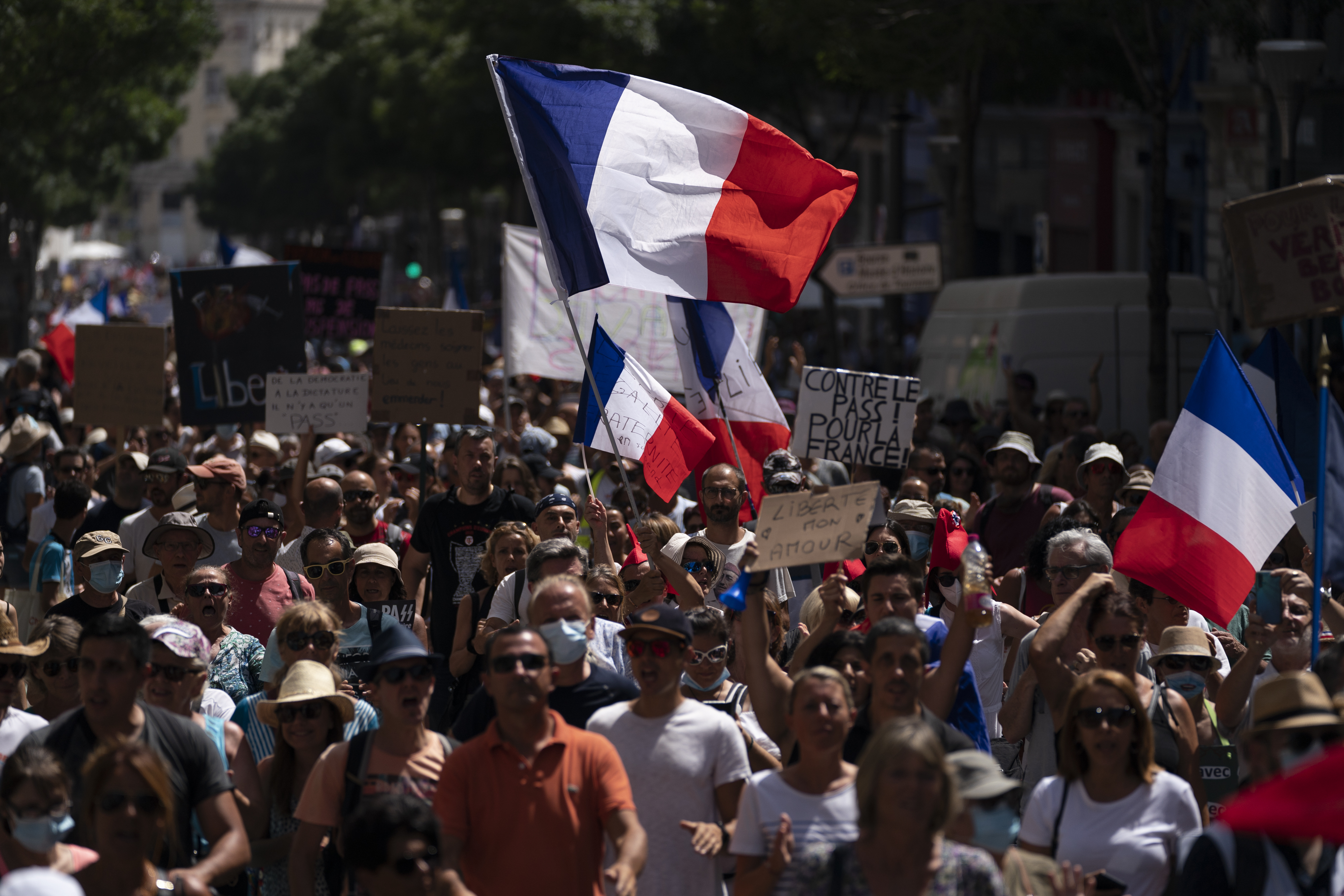 Protesters march during a demonstration in Marseille, southern France, Saturday, Aug. 14, 2021. Thousands of people, from families to far-right sympathizers, marched in dozens of cities across France for a fifth straight Saturday to denounce a COVID-19 health pass needed to access restaurant, long-distance trains and other venues. (AP Photo/Daniel Cole)

For 43 percent of French people, “France is becoming a dictatorship,” according to an Ifop poll published by the Journal du Dimanche the day after the fifth consecutive Saturday of demonstrations against vaccine segregation throughout France. The survey also shows that 53 percent of French people think that the health pass constitutes an infringement of freedoms. Furthermore, 34 percent of respondents sympathize with or support protests against the extensive use of Covid passports now in force in France.

For the fifth Saturday in a row, in the middle of August, demonstrations against the segregation of French people according to their status as vaccinated or unvaccinated saw hundreds of thousands of people gather in France’s major cities. The protests involved 214,845 people marching in 217 processions on Saturday, Aug. 14, according to figures given by a French police force known for its great capacity to adapt the numbers of demonstrators to the wishes of the executive power.

The videos of the demonstrations circulating on social networks suggest that the official figures should be multiplied by at least two and perhaps even higher, just like at the time of the huge demonstrations against “gay marriage” in 2012 and 2013.

According to the Police Prefecture, there were only 13,900 demonstrators in Paris on the Aug. 14 demonstrations against the health pass.

On Saturday, Aug. 7, the French interior ministry counted 237,000 demonstrators throughout France, so that after the Aug. 14 protests it could announce, for the first time, a slight decrease in the number of demonstrators from one Saturday to the next. And it did so with surprising accuracy.

On the first Saturday of anti-vaccine segregation demonstrations, which followed those of the July 14 national holiday three days before, the interior ministry had counted 114,000 demonstrators throughout France, including only 18,000 in Paris.

Accelerated video of the protests against the health pass – July 17, 2021 – Paris (aerial view)

Clearly, the obligation to present a health pass and an ID to go to a restaurant or cinema, to take the train, to go shopping in a shopping mall, or to be admitted to a hospital outside of emergency situations is going to be squarely rejected by a wide swathe of the French population.

Whatever the actual numbers of weekly demonstrations against the French government’s strategy to force Covid-19 vaccination on all French people aged 12 and over, a protest movement of this magnitude is unprecedented during the summer period. It could easily get bigger in September.

This is clearly what the Castex government and the pro-health pass French mainstream media fear, and this is why they are trying very hard to discredit the protesters with accusations of anti-Semitic slogans based on very flimsy evidence. Indeed, in France, the simple fact of asking the question “Who?” on a billboard, referring to those responsible for the health situation and the liberticidal decisions taken by the authorities, is enough to bring charges against you and to have your home searched by the police under allegations of anti-Semitic speech!

Yes, being called a “public provocation to racial hatred”, in the “land of human rights”, holding up a sign with the question “Who?” has suddenly become punishable by one year of imprisonment and/or a €45,000 fine.

Yet, in the opinion of the media and the authorities, these demonstrations attract people from all walks of life, from the far right to the far left, including many French people who have never demonstrated before in their lives but who, vaccinated or not, are worried about the segregation and Chinese-style generalized surveillance of the French people under the guise of the health pass. In a word: they are demonstrating to defend their freedoms and civil rights.

For the daily newspaper Le Monde, which is very close to the government at least on this issue (and many others), “the anti-health pass protest attracts a diverse audience – families, apolitical first-time demonstrators, caregivers or uniformed firefighters – that goes beyond the anti-vaccine or conspiracy movement alone.”

Echoing government propaganda designed to discredit these demonstrations in the manner of a totalitarian dictatorship, Le Monde also writes: “The Paris police prefect, Didier Lallement, reported to the justice system anti-Semitic signs held up on Saturday at the Paris demonstration. In a photo posted on Twitter by the police prefecture, one can see two signs with the words ‘Who?’ This anti-Semitic slogan appeared in the anti-Covid passport marches following an interview given on June 18 on CNews by a retired general, Daniel Delawarde, who signed an open letter evoking ‘the disintegration’ of France published by Valeurs Actuelles.“

Report by the Paris Police Prefecture of demonstrators carrying placards with the question “Who?” In the “land of human rights”, as the French like to call their country, they face one year in prison and a €45,000 fine.

Predictably, the health pass law was validated by the highly politicized constitutional court of the French Republic (known as the “Constitutional Council”), largely populated by politicians who do not necessarily have a legal background and chaired by Laurent Fabius, a former prime minister and former socialist minister appointed by former socialist President François Hollande, predecessor and mentor of current President Emmanuel Macron.

This was all the more expected since Laurent Fabius’ son, Victor, is a managing partner in McKinsey & Company, the international strategy consulting firm to which the French government has entrusted the development of its vaccine strategy.

The health pass law was approved on Aug. 9 by the Constitutional Council, but contrary to what the French government had hoped for, the protests did not abate after this decision. On the contrary, they have grown, and on July 29, a note from the French Territorial Intelligence Central Service (SCRT) informed the interior minister that the movement risked becoming permanent and even radicalized. According to territorial intelligence, a new wave of protest in the style of the Yellow Vests movement is to be feared with the introduction of the health pass.

Incidentally, this new protest movement has given a new political life to the former right-hand man of Marine Le Pen, Florian Philippot.

Leading his own party Les Patriotes, Philippot has been one of the main instigators of the protests against a “health dictatorship” that he himself has been denouncing relentlessly since the first lockdown in the spring of 2020. This is not without concern for the leaders of Le Pen’s National Rally who, while they too oppose the health pass, have not been as active as Philippot in stirring up street protests.