At Polish-Ukrainian border, Matteo Salvini confronted over his 2017 Putin T-shirt 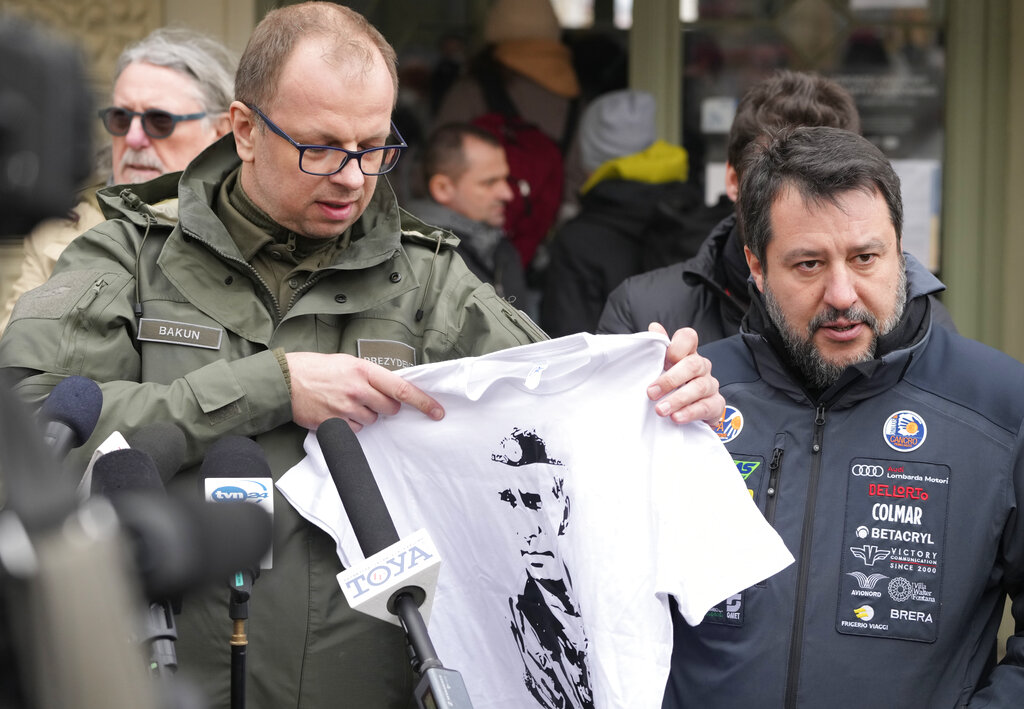 As the leader of the League party, Salvini, is currently a member of the humanitarian mission of the Italian parliament which is operating as part of the OSCE.

Wojciech Baku, the mayor of Przemyśl, a town near the Polish-Ukrainian border, held a joint press conference with Salvini in front of the town’s railway station which hosts a reception point for refugees.

During the conference, Bakun stated that the town’s authorities were cooperating with several Italian organizations, and he emphasized the respect he had for Italian citizens, companies and organizations for their aid during the crisis.

“At the same time, I have a personal remark for Senator Salvini. I have a gift for him. I would like him to wear this shirt and go to the border or one of the refugee centers,” Bakun stated.

The mayor then took out a shirt with an illustration of Putin and the words “Russian Army” written under it. Salvini had been photographed in a very similar shirt near the Kremlin back in 2017.

Bakun tried to give the shirt to Salvini, but the Italian politician refused to accept it.

“On the border or at the reception point, you would see what your friend Putin has done. What the person, that you have called you friend, has done to those people who are crossing the border at a rate of 50,000 per day,” the mayor stressed.

Salvini had interrupted the conference and left. The Italian politician later told journalists from his country, that war should not be happening anywhere. He condemned Putin’s invasion and declared that he wanted to stop the war.

Meanwhile, the mayor of Przemyśl explained why he had tried to give the shirt to Salvini.

“I wanted to show what people like Salvini, who have no vision and no strategic thought, have done and led to. Around 300,000 people, mainly women and children, have gone through our town. I wanted Salvini to see that and not pretend that he wanted to bring humanitarian aid to those people. He could’ve offered this support by criticizing and condemning Putin,” he said.

Wojciech Bakun, a former politician of the right-wing Confederation party, declared, that Salvini’s presence in Przemyśl was outrageous. He added that while he usually greeted guests in the town with dignity, he had no respect for Salvini.

Russia and Putin have long divided conservatives. Many saw Russia as a counter to growing liberal dominance in the West, and while some admired Putin’s nationalistic stance, others were pushed towards Russia due to domestic political pressure back home. Marine Le Pen’s National Rally party, for instance, was forced to seek funding from a Russian bank during France’s 2017 presidential election campaign after all French and European banks refused to offer funding.