Is Germany already an official ally of Putin?

Germans should be ashamed of its elites who want Ukraine to surrender to Russia, writes Sławomir Jastrzębowski in Salon24.pl 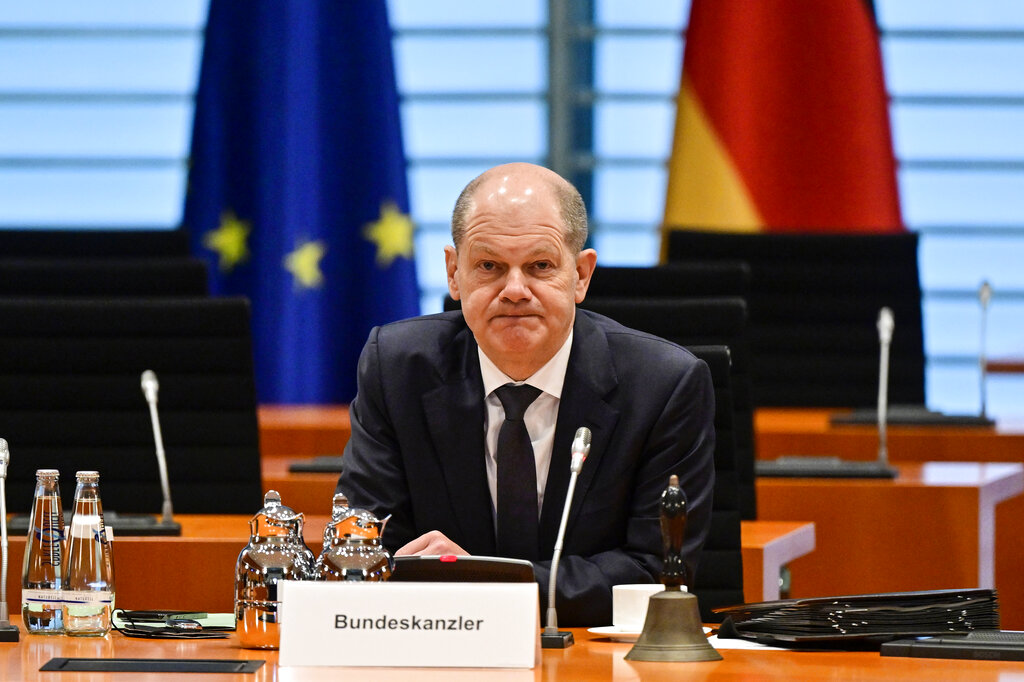 German Chancellor Olaf Scholz waits for the start of a weekly meeting of the German cabinet at the chancellery in Berlin, Wednesday, April 13, 2022. (John MacDougall/Pool Photo via AP)

Unbelievably hideous. That is what comes to mind when you read the letter sent to Chancellor Olaf Scholz by a number of German elites. In a thinly veiled manner, those so-called elites suggest to the Ukrainians that the only option available to them is to surrender, and get raped, slaughtered and deported to Siberia.

All this in the name of so-called pacifism, which is an ideology that the Germans have used to wipe their hands for a long time. The content of the letter is perfectly tailored to Scholz’s mind. Everything that he wanted to read, he got: under no circumstances should Germany arm Ukrainians because such a move would only create more destruction and increase the number of casualties.

Yes, exactly, Germans have their own point of view: in their opinion, giving the Ukrainians military aid will cause more misery, not only the misery for the Ukrainians, but misery in general. They had hardly time to not mention how much those poor Russians are suffering. The open letter to Olaf Scholz from the German establishment was published by Berliner Zeitung.

In the beginning, its authors state that they condemn this unjustified Russian war in Ukraine, but this is a hoax because after the words of condemnation, they warn the nations around the globe against prolonging the war and risking the escalation that would be caused by “arms deliveries.”

Can you understand that? German concerns of prolonging the war and bloodshed are caused by weapon supplies to a nation which is raped and murdered in front of the entire world.

This is Germans in a nutshell. This is how this nation thinks. They think this way because they already seek the opportunity of making gas deals with the murderer that is Vladimir Putin. They look forward to the informal division of Europe, which will be controlled and supervised by Russians and Germans. So, why do we even need Europe like this? Ukraine, Poland, Lithuania, Latvia, Estonia Czechia, and Slovakia have no desire to be under the boot of Russia or Germany.

What do we need such Europe for?

Let’s go back to the monstrosity that is this letter. Those Pharisees have their own, new masterpiece. In one part of this letter, they focus on the poor Russians who are the victims of war, writing that this conflict is causing supply shortages for Russians and many other poor countries throughout the world. What a half-baked empathy. To be honest, Russians are responsible for killing innocent children, shooting tied up civilians in the back of their heads, but German elites think about the bigger picture: Russians didn’t receive their shipment of Louis Vuitton bags! This is outrageous!

They also wrote that the price of a longer military resistance will be paid in more destroyed cities and more Ukrainian civilians killed.

“We urge the German government, European Union and NATO to discontinue supplying weapons for the Ukrainian army and to encourage the authorities in Kyiv to end military resistance against the promised negotiations regarding a cease-fire and a political solution”.

Unbelievable. The German elite wrote plainly: let the Russians kill the Ukrainians, and you — Ukrainians — agree to get murdered, so we all can live in peace…

And at the ending of the letter there’s a symptomatic point: authors say it’s necessary to build “a new European and world peace architecture” with the leading role of Russia, China and Germany. Putin’s aggressive state is to take care of the new peace architecture, but the Germans forgot about the United States in this puzzle. Why did they forget?

The letter is signed by the former deputy of the general secretary of the United Nations, the former vice-president of the German Bundestag, lawyers, sociologists, political scientists, columnists, journalists, composers, a Protestant theologian, economists, doctors. In short, they represent the best of the best in Germany.

It is time to ask a simple question: Is Germany already an official ally of Putin?