Polish PM to soldiers: We are responsible for the safety of all of Europe, but above all else, Poland’s safety 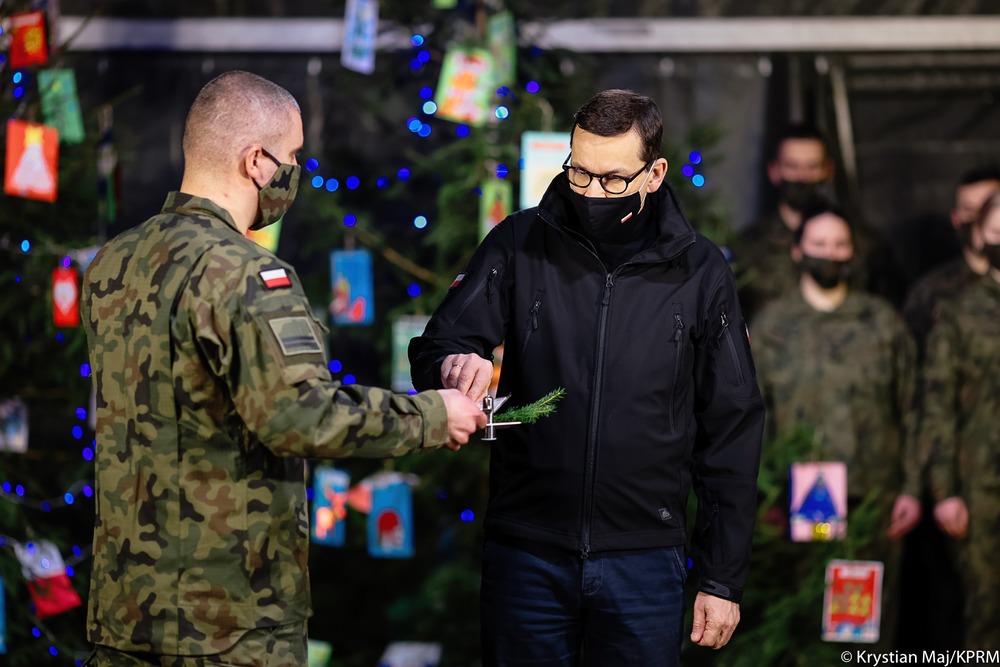 Prime Minister Mateusz Morawiecki visited Polish soldiers and officers at the Polish-Belarusian border on Christmas Eve to deliver a message to those men and women serving their nation.

“We are responsible for the entire European Union and for its security, but above all else, we are responsible for Polish territory and that is why we are proud of your service, your sacrifice and the fact that the Polish state and its citizens can count on you. You have not stained the honor of a Polish soldier or of a Polish officer. You defend the uniform and the safety of every Pole,” Morawiecki said during his visit to the Eastern Podlasie region of Poland.

He emphasized that owing to the soldiers’ service, Poland was able to avoid several severe threats. The prime minister emphasized that if the Polish border was not well protected or not protected at all, then hundreds of thousands of illegal migrants from the Middle East used by the Lukashenko regime as a tool for political crisis, would break through Poland’s borders.

“Not everyone has the chance to spend Christmas with their family in the warmth of their homes. There are those for whom work for their country demands sacrifices, being in a constant state of alert, bearing unpleasantries and risking danger even during Christmas,” he said.

“But it is thanks to these people that millions of Polish families can peacefully and safely enjoy their Christmas Eves,” Morawiecki stated.

The prime minister declared that the symbolic empty plate in many Polish homes at the traditional Christmas Eve supper will symbolize the thousands of Polish soldiers, Border Guard officers, Territorial Defense soldiers and police officers and their service on the Polish and EU border.

Morawiecki also shared a traditional Christmas wafer with the soldiers and ate a Christmas dinner with them.

There have been several dozen attempts to illegally cross the Polish-Belarusian border each day for the last few days. Since the start of December, there have been 1,500 such attempts. Since the beginning of the year, the Border Guard recorded close to 40,000 attempts to illegally cross the border, with 8,900 recorded in November, 17,500 in October, 7,700 in September and 3,500 in August.