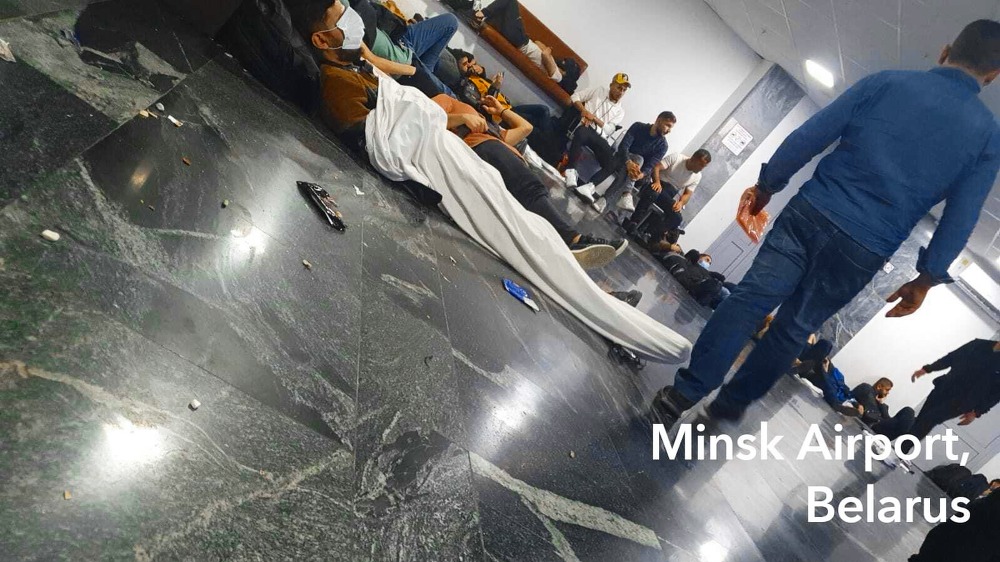 The airport in Belarusian capital Minsk has become completely blocked, as dozens of foreigners set up camp inside of the building. According to independent Belarusian information outlet Nexta, the foreigners in question are passengers traveling the Dubai – Minsk route operated by Flydubai, and they are mostly Iraqi citizens.

After arriving in Minsk, the migrants are stranded at the airport and sleep on the floor or on benches. Nexta shared a recording of the situation in Minsk on Twitter:

There are no reports of whether the situation at the Minsk airport improved since Wednesday when the video was first posted.

Franak Viacorka, a Belarusian opposition journalist and advisor to Sviatlana Tsikhanouskaya, wrote on Twitter that Belarusian secret services are helping the migrants get from the airport to the Polish-Belarusian border.

Also on Wednesday, portal Zerkalo.io reported that, based on information from Belarusian tourism operators, visas are no longer obtainable at the Minsk airport for Afghani, Egyptian, Iraqi, Yemen, Nigerian, Pakistani, or Syrian citizens.

Beginning October 17, only the citizens of Egypt, Iran, and Pakistan will be able to enter Belarus without a visa if they possess a valid permit for multiple entries to the EU or the Schengen zone.

Since Summer 2021, Poland, Lithuania, and Latvia have recorded violent surges in illegal attempts by Middle Eastern and African migrants to cross through these countries’ borders with Belarus. The EU and its member states believe that this is the result of deliberate actions by Belarusian authorities in response to EU sanctions. So far, Minsk has rejected such accusations.

Since September 2, a state of emergency has been enacted in the Polish regions closest to the Polish-Belarusian border. The Border Guard has recorded over 18,000 illegal attempts to cross the border since the start of the year; 6,700 attempts took place in October alone.