Czech army deployed over 17,000 soldiers to fight pandemic in past year

Soldiers helped with the testing of more than 71,000 people 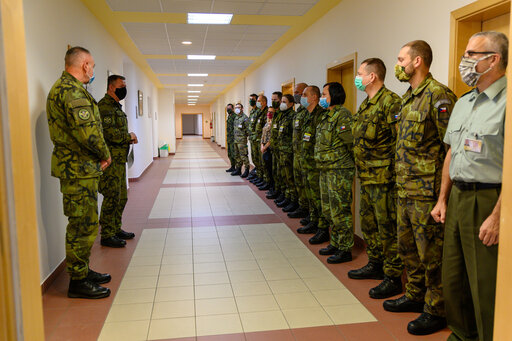 The Czech army deployed approximately 17,500 troops during its near year-long fight against the coronavirus pandemic. The military helped in hospitals and social facilities, participated in creating the so-called “Smart Quarantine”, transported medical material, and guarded borders. In the last ten months, soldiers also helped with the testing of more than 71,000 people, the spokesperson of the General Staff Magdalena Dvořáková told Czech News Agency.

According to Dvořáková, the army joined the fight with coronavirus on March 2, the second day after the confirmation of the first infected in Czechia. At that time, Chief of General Staff Aleš Opata issued an order setting tasks for the army should an epidemic break out in the Czech Republic.

One of the first deployments was to assist in testing at border crossings, and since mid-March, soldiers and police have been guarding closed borders with neighboring states. In ten rotations, the army sent 9,074 soldiers and 1,171 pieces of equipment to the border.

Army logistics were also involved in resolving the crisis. In two months, about 400 soldiers covered about 50,000 kilometers and transported 200 tons of material. The Czech Army Air Force also took part, both in transport within the Czech Republic and on flights abroad.

Last spring, military pilots took part in helping Czech citizens who could not return from abroad due to closed borders. In addition to several military special flights, the Czech Ministry of Foreign Affairs also used civil aircraft and buses for repatriations, and also provided exemptions for transit.

In total, from March 14 to April 14, Czech diplomacy aided in the return of more than 5,000 Czechs and 1,000 citizens of other countries, while EU countries provided transportation to 531 Czechs, said Foreign Ministry Spokeswoman Zuzana Štíchová. Most of the costs of repatriation flights to the Czech Republic were covered by the European Union.

The military has also been significantly involved in the Smart Quarantine project. Major General Petr Procházka was appointed head of the central management team, and Colonel Petr Šnajdárek became the “spiritual father” of the Smart Quarantine. In October, President Miloš Zeman awarded him the Medal of Distinguished Service for his work.

Already during the first wave of the epidemic, soldiers were deployed in two social facilities in Ostrava and Mariánské Lázně, which struggled with a shortage of personnel. During autumn, the possibility of sending soldiers was extended to hospitals, and from Nov. 10, the government increased the maximum number of deployed troops to 900. Soldiers in these facilities perform mainly auxiliary work. Besides, the army has also set aside 400 of its members, so-called combat rescue personnel, who have first-aid training.

However, the army was provided other tasks as well. At the exhibition center in Letňany, Prague, for example, it built a backup field hospital within eight days. Soldiers and military police also took part in guarding the area around Litovel, which found itself in quarantine, and as of today, military police have also begun to help guard three closed districts in the Karlovy Vary and Hradec Králové regions.

According to current military estimates, about 17,500 troops were deployed during the year. This is the total number of people sent by the army for each task. At the beginning of this year, 22,636 soldiers served in the army. Another 4,000 troops fall under the Ministry of Defense.

In addition to pandemic tasks, the military had to continue to perform other duties, including 15 foreign missions.