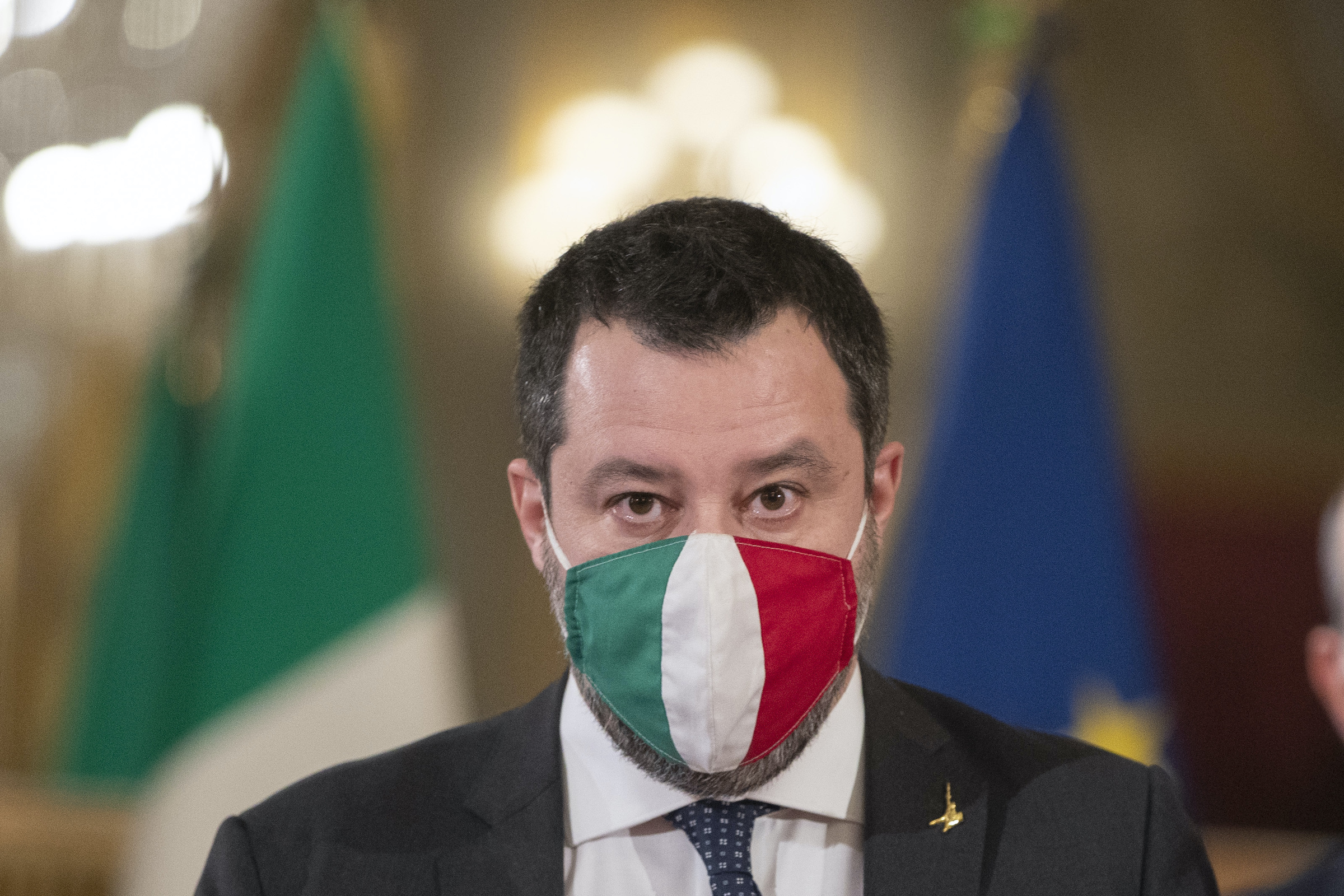 A judge intimately connected with attempts to prosecute League party leader Matteo Salvini in 2018 is now sharing his secrets about corruption in Italy’s judicial system in a new book, and it is sure to have implications regarding rule of law for both Italy and, more broadly, the entire European Union

Luca Palamara, the former president of the association of Italian magistrates (ANM) from 2008 to 2012 and former member of the High Council of the Judiciary (CSM) from 2014 to 2018, had warned that he would refuse to bear sole responsibility for crimes he was accused of and would start naming names and divulging information about corrupt activities. He is now carrying out his threat with the publication of an interview turned into a book with Alessandro Sallusti, a journalist who is the publishing director of Il Giornale daily newspaper.

In the book entitled “The System” (Il Sistema), Palamara breaks the omertà on the links between magistrates and politicians, on the domination of left-wing currents in the judiciary and the impact this has often had in terms of judicial interference in the political and democratic life of the country.

“Power, Politics, Scandals: The Secret History of the Italian Magistracy” is the subtitle of the book born of Sallusti’s conversations with Palamara.

Palamara was charged in 2019 with corruption relating to the buying and selling of judicial sentences, his clientist practices and his having leaked information from the CSM, resulting in him being expelled from the ANM last September before being struck off the magistracy the following month by decision of the CSM. The scandal erupted last year when the newspaper La Verità began to publish in May the contents of conversations between Palamara and other magistrates, some of whom were like him members of the CSM.

Judges secretly questioned the credibility of the Salvini prosecution

The conversations leaked to La Verità came from Palamara’s mobile phone having been tapped in 2018 for the purpose of the inquiry. In those conversations, Palamara and his friends were working together to indict Matteo Salvini, the then deputy prime minister and minister of the interior, while admitting among themselves that Salvini had done nothing illegal.

It was an attack on Salvini’s decision to close Italian ports to illegal immigration, and in particular, at the time, his decision to prohibit the landing of migrants on board the Italian Coast Guard vessel Diciotti.

While the Italian Senate refused to give the green light to a trial against Salvini in this case, it changed its attitude after the 5-Star Movement (M5S) joined an all-left government by the M5S and the Democratic Party (PD) in September 2019.

Thus, the leader of the main opposition party, the League, is now being tried by a Ministers Tribunal in two cases involving migrant ships: that of the Gregoretti, identical to that of the Diciotti, and that of the Open Arms, which also concerns the decision to refuse that ship — belonging, contrary to the Gregoretti and the Diciotti, not to the Italian Coast Guard but to a Spanish NGO — the possibility to disembark its shipment of illegal immigrants in an Italian port.

As in the case of Gregoretti and Diciotti, the ban was lifted after a few days, after Italy’s European partners committed themselves to take charge of these illegal immigrants.

On Aug. 22, 2018, the public prosecutor of Agrigento, Luigi Patronaggio, opened an investigation on his own initiative and inspected the Diciotti. Two days later, CSM member Luca Palamara wrote to him: “Dear Luigi, Legnini will also call you, we’re all with you.” Giovanni Legnini was at the time vice-president of the CSM.

He himself is neither judge nor prosecutor. He was one of the eight out of 27 members of the CSM appointed by Parliament. A former member of the Communist Party, he was in the PD at the time of his appointment to the CSM in 2014 by Parliament. He was also Secretary of State in the Renzi government at the time.

Among La Verità’s revelations are Palamara’s conversations with Legnini, from which it emerges that the two men were organizing with other members of the CSM and the ANM the best strategy to attack Salvini.

The day after the exchange between Palamara and the public prosecutor of Agrigento, Salvini officially became the target of the latter’s investigation. In the days that followed, while the case was brought before the Ministers Tribunal of Palermo by Public Prosecutor Patronaggio, Palamara had a new exchange about that investigation with a judge of the Court of Palermo, Fabio Pilato. La Verità published the contents of that exchange on May 30, 2020, and here is a short excerpt:

Pilato: Guess who the president of the Ministers Tribunal in Palermo is?PalamaraL: Who?Pilato: Me.Palamara: Awesome!

Two days after the first publication made by La Verità, the president and national secretary of the National Association of Magistrates (ANM), formerly headed by Palamara, resigned. As for Palamara, he will not accept to be the scapegoat. Explaining himself on television after La Verità’s publication, he stated: “I wasn’t the only one to intervene”, and “prosecutors are sensitive to migrants”.

In his interviews with Sallusti, published in the book “The System”, Palamara provides the details.

“It is a long interview that Palamara granted me, he and I locked ourselves together for weeks, surrounded by folders of documents, notes and thousands of phone messages and emails extracted from his cell phone and computer,” Sallusti wrote about his conversations with Palamara in Il Giornale.

The then head of the powerful association of magistrates and its system of predominantly left-leaning political leanings also mentions in his interviews with journalist Alessandro Sallusti how ANM had conducted discussions in 2010 with Gianfranco Fini, the then president of the Chamber of Deputies and number two in Silvio Berlusconi’s party, which he left in February 2011 to create his own party with a group of parliamentarians.

His departure was a major factor in the fall of the Berlusconi government in November of the same year and the establishment of a new government headed by former European Commissioner Mario Monti. At the time of his defection, Gianfranco Fini was the target of an investigation that was then closed in record time by the Public Prosecutor’s Office in Rome. Was there a link between the two? Palamara suggests there was.

After the scandal of the conversations of prosecutor Luca Palamara published in the newspaper La Verità, President Sergio Mattarella, who is also president of Italy’s judicial council CSM, denounced “the unacceptable confusion between politicians and magistrates” and the “degeneration of the system of currents” within the magistracy, and he called for deep reform — a reform that was subsequently prepared by the Minister of Justice Alfonso Bonafede and whose imminent presentation to parliament has just been halted by the fall of the Conte government. Is there also a link between the two?

Curiously enough, such interference by independent but unelected judges and prosecutors in Italy does not seem to bother Brussels.

What can Italy’s democracy do about it?

The Italian judiciary is independent and the executive and legislative branches cannot exert political pressure on judges. The same cannot be said of the reverse, though, as judges and prosecutors do seem to exert heavy political pressure on democratically elected leaders, either by bringing charges for false cases or by dismissing real cases, bringing down governments and making right-wing leaders ineligible to run for office for many years.

In order to restore democracy and the rule of law, the Italian Right could undoubtedly draw inspiration from the Polish reforms and include in its next electoral program this extract from the program of the Law and Justice Party (PiS) published in 2014, a year before the elections that brought PiS to power in Poland:

“The justice system and the public prosecutor’s office in our country need a profound reform that must be based on three principles.Firstly, the judicial institution cannot be ‘a state within the state’. Without prejudice to the fundamental constitutional guarantees of independence and impartiality, citizens cannot be deprived of influence on the functioning of the ‘third power’.

It must serve society, the people, not itself. There must be effective control mechanisms to prevent parts of the judicial institution from becoming detached from their role as servants of society and to correct errors.

Secondly, criminal policy must allow for the effective prosecution and fair punishment of the perpetrators of crimes and misdemeanors. Such policy is to be implemented mainly through the action of the Public Prosecutor’s Office in prosecuting crimes and misdemeanors, bringing the perpetrators to justice and appealing against controversial court judgments. For this reason, the Public Prosecutor’s Office must once again become a part of the executive branch, headed by the Minister of Justice, exercising the function of Attorney-General as an instrument for the implementation of policies for which the Government will be accountable to parliament.

Third principle: zero tolerance for pathologies in the judicial institution. The judiciary must be a sphere of state action completely free of corruption, nepotism and business ties.”

So much the worse if the implementation of such principles means Italy will have to face the wrath of Brussels, as was the case for Poland after its adoption of laws reforming the justice system in 2017-18. It is better for a European nation to be a democracy targeted by EU sanctions procedures than to be governed by unelected magistrates while being well regarded in Brussels.