Migrants from Belarus are ‘live ammunition’ in hybrid warfare against Lithuania

Lithuania is reaching its breaking point due to the massive influx of illegal migrants facilitated by Belarusian authorities since May, reports alarmed LRT television journalist after investigation 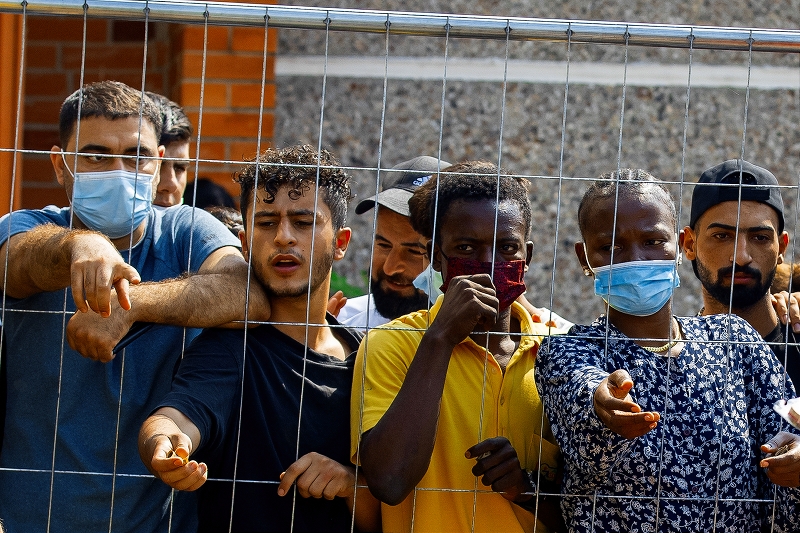 Migrants wait to buy some things standing behind the fence at the refugee camp in the village of Verebiejai, some 145km (99,1 miles) south from Vilnius, Lithuania, Sunday, July 11, 2021. Migrants at the school in the village of Verebiejai, about 140 kilometers (87 miles) from Vilnius, haven't been allowed to leave the premises and are under close police surveillance. Some have tested positive for COVID-19 and have been isolated in the building. (AP Photo/Mindaugas Kulbis)

The current issue with illegal migrants entering Lithuania through its border with Belarus has intensified since the end of May 2021. The Lithuanian government believes that this is a form of hybrid warfare being conducted by the Belarusian regime.

Lithuanian LRT television journalist Indre Makaraityte explained the results of the investigation carried out by LRT’s journalist investigation department. The number of illegal migrants flowing in from Belarus has multiplied ever since the EU imposed sanctions against Alexander Lukashenko’s regime. Already in May the dictator had threatened to purposefully weaken control over migration from Belarus.

Makaraityte pointed out, that Lithuania has never faced such a flood of migrants. All of them are applying for political asylum which activates long procedures. Until these procedures are finished with a positive or negative decision, the migrants must be sheltered and integrated. Even in the case of a negative response, the migrants may appeal to the decision and wait. Such procedures can take up to a year.

“Lithuania simply does not possess the infrastructure to guarantee shelter to all these people. There are almost 2000 of them right now, including families with children,” she said.

LRT established that the price of the journey to the Lithuanian border from Iraq is between USD 6000 to 15000.

LRT journalists managed the establish the framework according to which migrants from Iraq reach Lithuania. Those who want to leave, simply purchase a trip and receive a tourist visa from Belarus. They are then accommodated in 3 to 5 star hotels in Minsk where they stay for three to four days. After that, they are transported to the border by a Belarusian guide who leaves them at the border and tells them: “Europe is over there.”

Makaraityte informed that Belarusian guides tell the migrants that a car will be waiting on the other side of the border which will take them to Germany. A trip from Kurdistan to Germany costs USD 15000.

LRT established that the price of the journey to the Lithuanian border from Iraq is between USD 6000 to 15000. Migrants are promised that once they reach Lithuania there will be no problem with travelling to other EU states. Meanwhile, Lukashenko’s government makes profit not only on the visas and accommodation in Minsk, but also deposits.

A Belarusian state tourism company, which organizes the trips from Iraq to Belarus, has an agreement signed with Iraq according to which each traveler must leave a deposit of USD 3000 to 4000 in Iraq in case they were not to return from Belarus. If a migrant does not return, then the deposit goes to the Belarusian state in the form of a fine through the Belarusian embassy in Iraq.

“We have counted, that there are at least 900 illegal migrants from Iraq in Belarus. The Belarusian regime has received at least 2 million euros from this scheme,” Makaraityte emphasized.

Title image: Migrants wait to buy some things standing behind the fence at the refugee camp in the village of Verebiejai, some 145km (99,1 miles) south from Vilnius, Lithuania, Sunday, July 11, 2021, AP Images.