Polish PM: We are dealing with hybrid warfare from Belarus

Belarus is seeking to use immigration as a weapon against its rivals in Europe, warns Poland’s prime minister 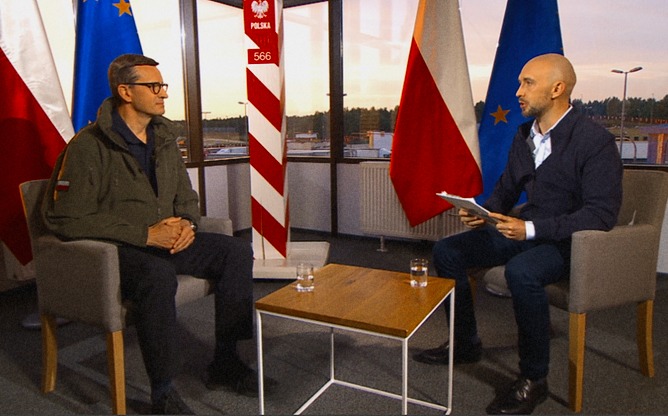 Polish Prime Minister Mateusz Morawiecki disclosed that the Polish government has evidence that Belarusian travel agencies are bringing in Middle Eastern migrants, who are then being pushed into Poland and the Baltic states.

Morawiecki, speaking in the context of recent developments in the migration crisis on the Polish-Belarusian border, said, “We are subjected to a hybrid attack and specifically prepared provocation,” during an interview for Polsat News. He added that this attack is aimed to cause chaos in Poland and the EU by using the difficult situation in the Middle East as a weaponized tool.

During the interview, the prime minister silenced all speculation concerning the origin of the migrants who are currently stranded near the Polish border.

“We have proof that representatives of different nationalities from the Middle East, mainly from Iraq but also Syria, are being transferred to Belarus on purpose by travel agencies. Today, I received a detailed report presented by the commander of the Border Guard and therefore, we must answer this attack in a decisive way by protecting the Polish border,” he said.

Morawiecki explained that such policy may lead to trouble for Belarus. The migrants who arrived from Iraq legally entered Belarusian territory. Under international law, Belarus is obliged to ensure their security and any needs they might have, including the right to apply for asylum.

Due to information about the difficult situation of the migrants located near the Polish border, the government has sent a transport with humanitarian aid to the border. The aid is awaiting the permission of Belarusian authorities to cross the border.

Today, I see very clearly, that the European Commission has understood, done its homework and speaks Poland, Czechia and Hungary’s language.

The prime minister hoped that Belarus will respond in a positive manner, as then Polish authorities will be able to secure everything for the migrants, including tents, cots, blankets, food, and medicine.

Morawiecki also revealed that he was surprised by the European Commission’s statement in support of Warsaw’s actions to defend the EU’s external borders.

“Today, I see very clearly that the European Commission has understood, done its homework and speaks Poland, Czechia and Hungary’s language. After all, it was the Visegrád Four which showed the risks associated with the current situation and the necessity to defend our own territories,” he said.

The prime minister also stated that there is no need to construct additional centers for migrants and the priority should be to defend the border from hybrid attacks from the East.

He assured that Poland is constantly cooperating with the United States during the evacuation operation from Afghanistan. Morawiecki believes that the current situation in the country is poor. “Due to this, we are constantly receiving new names to evacuate. Our transport services are on-site, and we can send an additional few or dozen planes. We are transporting those people to Poland. The evacuees whom we had been asked to transport will later be taken away by our allies,” he said.