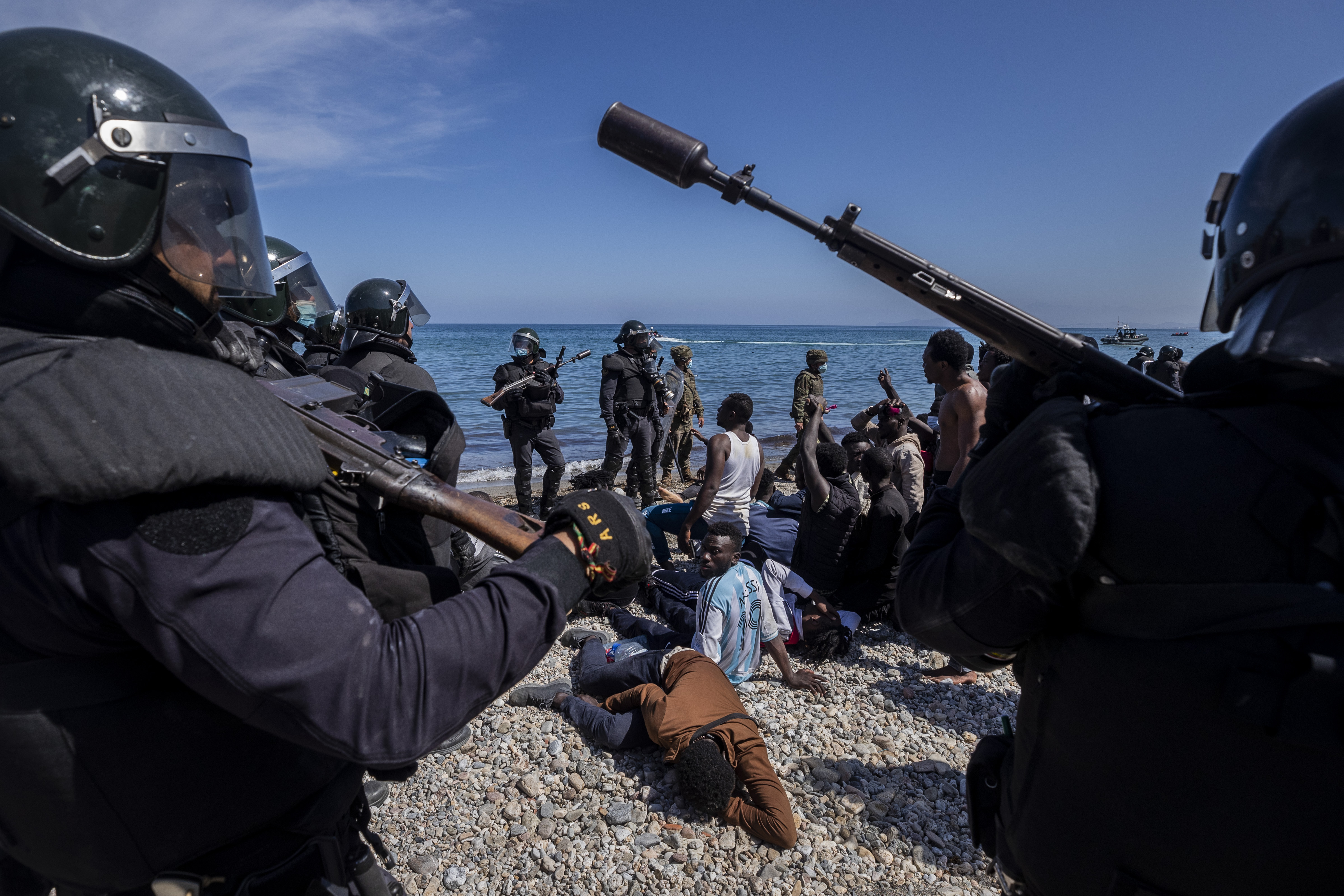 Migrants are surrounded by Spanish police near the border of Morocco and Spain, at the Spanish enclave of Ceuta, on Tuesday, May 18, 2021. (AP Photo/Bernat Armangue)

Spanish populists are calling on authorities to investigate whether an Algerian man accused of belonging to a terrorist organization who is also wanted for murder has landed in Spain after escaping from North Africa by boat.

Spain’s Vox party has called on the country’s interior ministry to investigate whether Muhammad Hammali, a prominent member of the Islamist terror group Rachad, is in Spain after he allegedly murdered one individual and injured four others with Kalashnikov-style assault rifle in the Algerian town of Sidi Ali, La Gaceta reports.

“We demand that the Ministry of the Interior investigate whether this Algerian terrorist is in Spain. Our country has become a preferred destination for criminals and terrorists. They know our borders are the easiest to cross,” Vox wrote on its official Twitter account.

Although a motive for the shooting has yet to be determined, those who witnessed the attack, which took place earlier this month and resulted in the death of a 60-year-old public servant, say that Hammali tried to kill as many people as possible.

Following the shooting, news that Hammali was the perpetrator of the attack quickly spread through various Algerian publications and over social networks, with many calling for citizen collaboration to locate his whereabouts. Later, some of the same publications confirmed that Hammali managed to escape from Mostagenem, a port city on Algeria’s northern Mediterranean coast, to flee to Spain by boat.

Earlier this month, Hammali released a video where he attempted to persuade people that he had nothing to do with shooting in the Aín Defla region. During the video, although he claimed to have documents that could prove that he was in Spain before the crime of which he is accused, Hammali never presented them.

After the video’s release, various followers of his terrorist organization posted messages on social media in support of Hammali, many of which reaffirmed that the alleged perpetrator of the shooting had left Algeria for Spain.

In May, Algerian authorities designated the Kabylie separatist group (MAK) and radical Islamist group Rachad as terrorist organizations, after the High-Security Council accused the two groups of posing “hostile and subversive acts… to destabilize the country and damage its security.”

Among the founders of Rachad, there are former members of the Islamic Salvation Front (FIS), a militant Islamist party that was dissolved by Algerian authorities in 1992 following the outbreak of the civil war one year earlier. The conflict, which lasted until 2002 and left more than 150,000 dead, broke out after the government, backed by the military, canceled parliamentary elections after a FIS victory in the first round, and refused to transfer power to Islamist authorities.

Days ago, 33-year-old Abdellah Mohamed, a former gendarme in Algeria who was wanted for his alleged membership of Rachad, was handed over by Spanish authorities to their counterparts in Algeria. As a result of his membership in the terrorist group, Spanish authorities have banned him from entering Spain for ten years, according to a report from Agence France Presse.