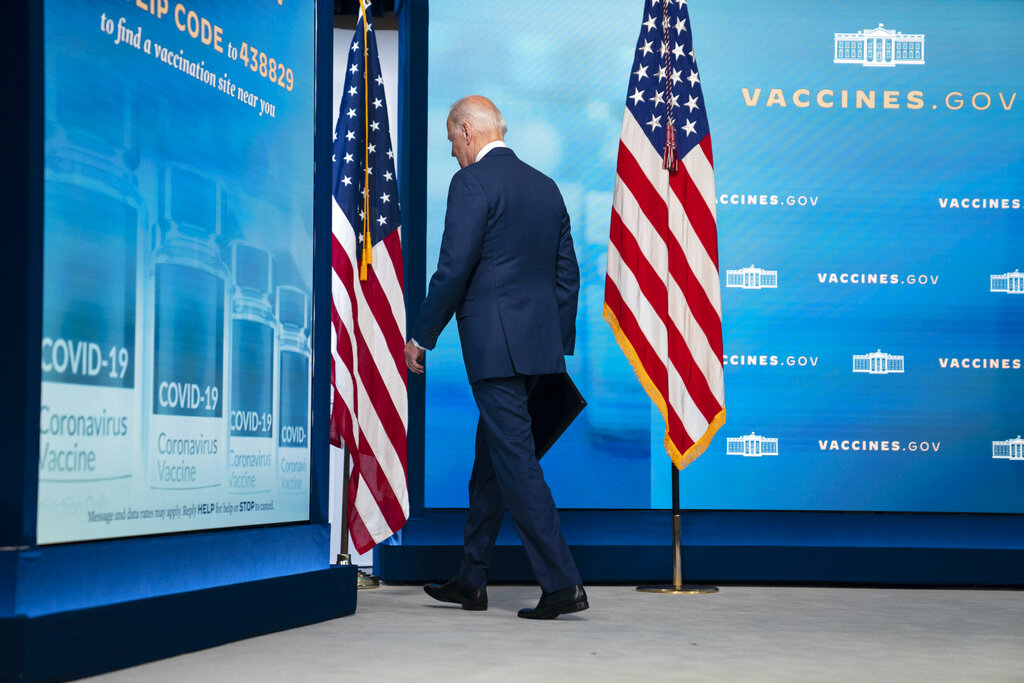 President Joe Biden walks off after delivering remarks on the full FDA approval of the Pfizer-BioNTech coronavirus vaccine, in the South Court Auditorium on the White House campus, Monday, Aug. 23, 2021, in Washington. (AP Photo/Evan Vucci)

A 2010 letter taken from the archives of the Counter-Terrorism Center at the West Point Military Academy in the United States has attracted a lot of attention in the international media these days.

Osama bin Laden, the then-leader of al-Qaeda, instructed members of his terrorist network to target planes that could be used by President Barack Obama and CIA director David Petraeus, who was later involved in a sex scandal.

This is not what created waves, but rather the fact that Bin Laden specifically advised his followers not to assassinate then Vice President Joe Biden. Bin Laden justified this by saying that if Obama, who he described as leader of the infidels, were to be killed, Biden would become president, and he would be completely unprepared for the position, thus plunging the United States into crisis.

These are prescient thoughts when, 11 years later, we see a President Biden leading a catastrophic withdrawal from Afghanistan. This is not our assessment — it is that of the global press. Nile Gardiner, one of the leaders of the Heritage Foundation in Washington, for example, called Biden’s entire presidency a monumental disaster in the British conservative newspaper The Telegraph the other day. Gardener also considered it devastating how Biden dealt with the deteriorating border situation on the US-Mexico border.

According to the author, the Biden–Harris duo not only undermines the international power of the United States, but also causes great damage at home, as more than one million migrants have crossed the southern border illegally during their administration. Gardener put it this way: Biden’s policy of open borders is so extreme that even the most liberal governments in Europe would not dare to go down that path.

“The tragedy in Afghanistan will be a wake-up call for America’s allies. Biden does not lead the free world, but actively destroys it,” he wrote.

Biden is no longer spared by CNN either, though the liberal news channel did a lot to support his election. Clarissa Ward, CNN’s Afghanistan reporter, checking in from Kabul Airport, gave a very shocking opinion on the performance of the Democratic administration. She called the American withdrawal a complete failure, reporting chaotic scenes, endless despair, and outrage at why the Taliban seemed to have caught Washington completely unprepared.

The consequences of the failure of the US president for Europe and its neighborhood have long been topics of not only foreign policy debates, but also a tangible reality. Nation-state leaders say that they do not want to accommodate new masses of migrants.

Austrian Chancellor Sebastian Kurz noted that 40,000 Afghans already live in Austria, while Central Asian countries bordering their homeland are not rushing to take in refugees. However, to quote Slovenian Prime Minister Janez Jansa, the EU has no obligation to help and fund all the refugees on the planet who have no wish to defend their own country.

Brussels has not made much of an effort to find a solution, either. European Commission President Ursula von der Leyen is already talking about migrant quotas and that resettlement of vulnerable people is of the utmost importance, framing it as a moral obligation. Swedish Home Affairs Commissioner Ylva Johansson’s statement already contained forward-looking ideas, as she emphasized the need to help people primarily in their own region. But then she also mentioned the quota – not under EU, but UN jurisdiction.

No matter how nice the words Brussels and Soros-financed think-tanks say, Europe cannot accommodate all the refugees in the world. If we just talk about it, we are already attracting masses to the continent. Let’s not repeat 2015.