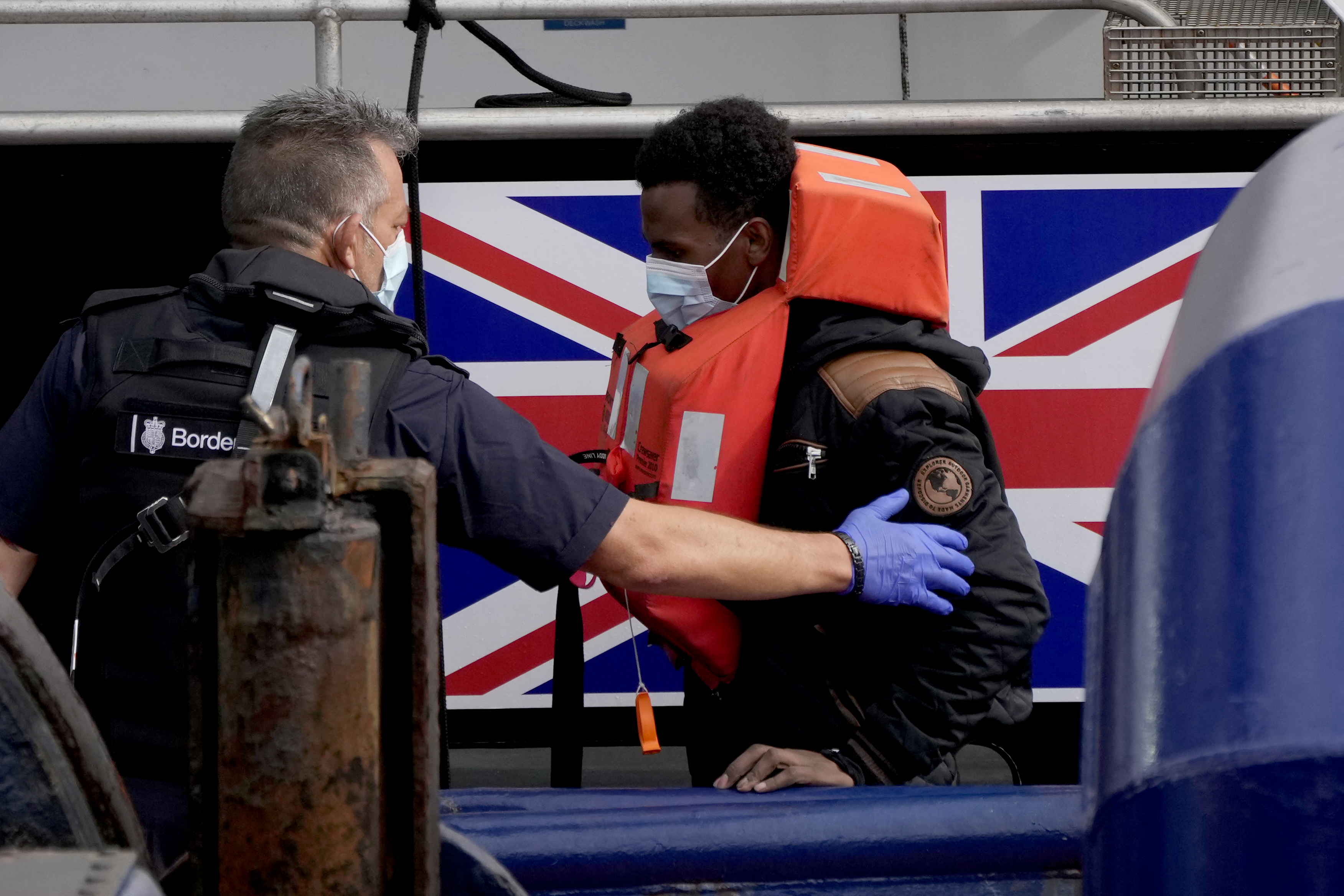 A man thought to be a migrant who made the crossing from France is disembarked after being picked up in the Channel by a British border force vessel in Dover, south east England, Friday, Aug. 13, 2021. On Thursday French authorities said an undocumented migrant was airlifted to hospital from the English Channel after a boat carrying about 40 people trying to reach the U.K. started to sink Thursday morning. (AP Photo/Matt Dunham)

The recent spat between France and the United Kingdom about the fate of the ever-growing number of migrants on French soil is yet another sign of a bankrupt European asylum system, which only sees a never-ending redistribution game between European countries as the sole solution for the constant stream of illegal and legal arrivals from the Third World.

While there are no French plans whatsoever for effective border protection or enforcing deportations of failed asylum seekers, France’s Europe minister, Clement Beaune, is nonetheless demanding a new migrant allocation deal with the United Kingdom. Reacting to complaints from British authorities about the record number of illegal migrants crossing the Channel on small boats, instead of promising to reduce these attempts, Beaune had demanded that Britain should accept a certain number of migrants currently waiting at France’s northern shores, and take them to the UK via legal avenues.

“We must, after Brexit, have a new migratory deal no doubt between the EU and Britain so that we can expel, or direct a certain number of migrants to the UK, so they can request asylum,” said the minister.

In justifying such a demand, Beaune had exploited the old argument that Britain’s social security and immigration system attracts illegal migration, saying, “It’s [Britain’s] responsibility.. We have seen sometimes that it is the attractiveness of Britain’s asylum system that is in question. We are the ones who have paid a high price over the past 10 years – we see it in Calais regarding organization, humanitarian aid and police checks.”

Blaming the British for the chaos in France is an instrument that has been employed by French politicians for centuries, and it would seem that old habits do not die. France is on the brink of a societal breakdown due to the rapid pace of social transformation that dates back to the end of the Second World War, and the country has also seen some of the bloodiest Islamist terror attacks, as well as an explosion of criminality committed by Third-World migrants, which has evidently very little to do with the failings of the British asylum system. Yet, Beaune’s observation is valid to an extent when he points at migrants, who are not satisfied even with the generous French social system and its extremely ineffective immigration laws.

Yet, observers have pointed out that while France wants to negotiate a migrant relocation deal with Britain, its patrol boats are escorting migrants into British waters. Conservative MP Tim Loughton reacted by saying, “Why am I not surprised? So here’s the deal. They can send migrants to the UK to make their asylum applications so long as they immediately take back all of those who have their claims rejected and stop all those still trying to come illegally in small boats.”

While the British are distracted with debating the crisis on their southern borders with the French, Macron’s ministers have been busy softening up the UK’s northern neighbors, feeding the Scottish government with false hopes, and supporting the Irish in their post-Brexit border disputes against the Boris Johnson government. This strategy from Macron has been aptly acknowledged in an Irish Times article, in which the author remembers the French assistance offered to Ireland in “easing dependence on the British market for export revenue” after the Brexit referendum in 2016.

One of the most helpful benefactors in helping Ireland to wean itself off the UK mentioned by name is none other than France’s Europe minister, Clement Beaune. He is thanked alongside Macron for supporting the Irish Republic in its dispute with the UK over the Northern Irish border.

It seems then that Macron has realized the effectiveness of playing a type of hybrid warfare with migrants for political and economic gains, a strategy that could eventually endanger the territorial integrity of the UK. Yet, the example of Turkey or Belarus, whose autocratic leaders have both used illegal migrants as a weapon against their adversaries, shows that despite its dramatic effectiveness, such a strategy will eventually lead to internal instability and political crisis.