Germany’s chancellor met with Polish PM Mateusz Morawiecki to discuss the situation on the Polish-Belarusian border, and the dangers stemming from the Russian-backed Nord Stream 2 gas pipeline 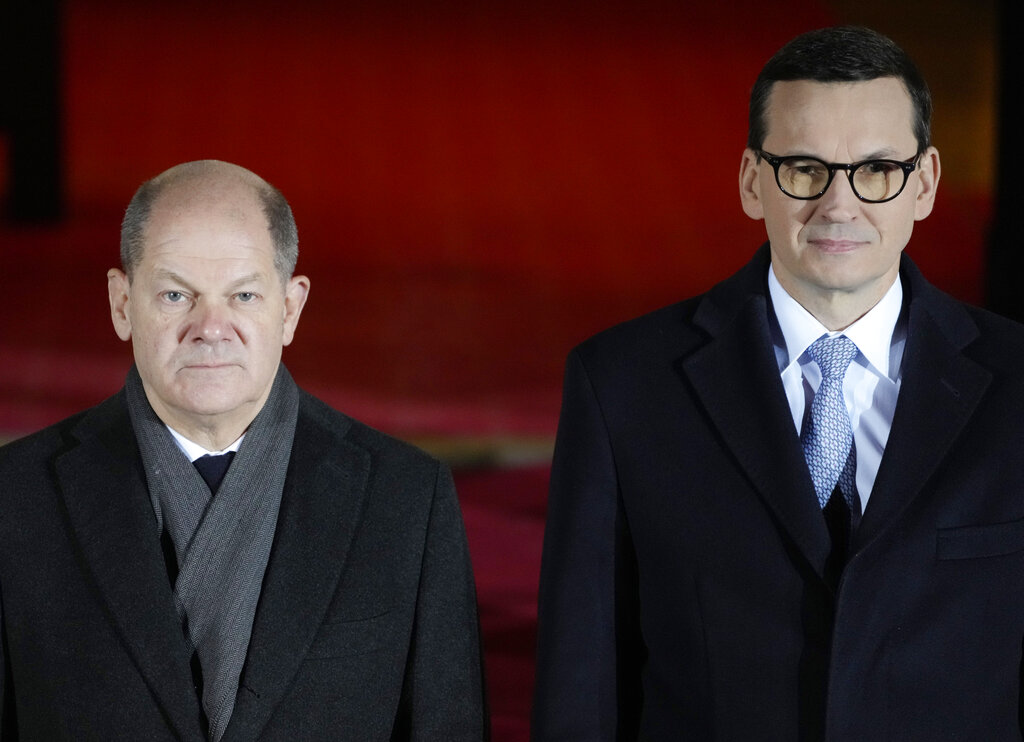 Germany’s new chancellor, Olaf Scholz, visited Warsaw on Sunday and took part in a meeting with Polish Prime Minister Mateusz Morawiecki. This visit marks Scholz’s third trip outside Germany since becoming chancellor, with Scholz stopping in Paris and Brussels before making his way to Warsaw.

Morawiecki received Scholz with military honors in Warsaw ahead of their talks. Morawiecki later said the visit signifies a “new chapter” in bilateral ties after Germany’s new government took power.

After the meeting, Morawiecki said that they had discussed the issue of Poland’s Eastern border, which is also the EU and NATO’s border. He also appreciated the fact that Scholz had chosen Poland as one of his first international visits.

“I presented to the chancellor with the shifting tactics of the Belarusian regime concerning the artificially-created migration crisis and the usage of people as human shields and weapons. The border must be secure so that the EU can defend itself and decide about its own fate,” Morawiecki said.

He added that he had discussed possible scenarios for official sanctions, which will also be brought up during the upcoming European Council.

Morawiecki told the German chancellor that both Poland and Ukraine were in a much more severe situation due to the opening of Nord Stream 2 gas pipeline.

“Poland, Slovakia, and Eastern EU member states may be subjected to blackmail from Russia. This is why we are building a Baltic pipeline and are becoming more independent of Russia. Ukraine, meanwhile, is entirely dependent when it comes to gas and other energy sources. We would not want Ukraine to be subjected to Russian blackmail,” he explained.

Morawiecki warned that blackmailing Ukraine would lead to a destabilization on NATO’s Eastern flank, which is why he stressed the risks of opening Nord Stream 2 to Scholz.

The meeting also concerned issues associated with the European Union.

“We wanted to both express our desire for the ongoing conflicts to be quickly resolved. Poland has a certain conflict with the European Commission. I tried to propose solutions, and we will see how this matter turns out,” he said.

“I believe that it is great luck that, as friends and neighbors, we stand next to each other in face of the terrible chapters of history and crimes which Germany exacted upon Poland. I am all the more pleased that we can create our common future together as friends,” he said.

Scholz emphasized that many world powers will exist in the changing world, and Europeans will comprise only a small part of the world’s population.

“Therefore, it is even more vital for us to develop what connects us. To develop our strength together and this means joint responses to challenges. One such challenge is the current policy of the regime in Minsk,” Scholz said.

The new German government does not intend to change its policy towards Poland compared to the one undertaken during Angela Merkel’s era. Problems in bilateral relations have not lessened, and in fact, there are even more of them. An example is the motion in the new German government’s coalition agreement about efforts to federalize Europe, which has sparked worry within the Polish government.

On Friday, Poland’s foreign minister, Zbigniew Rau, met with his German counterpart Annalena Baerbock in Warsaw. The Polish Ministry of Foreign affairs stated that the subject of their talks were key issues from the Polish point of view — the rights of Poles in Germany, the commemoration of Polish victims of the Second World War in Berlin and the issue of war reparations.