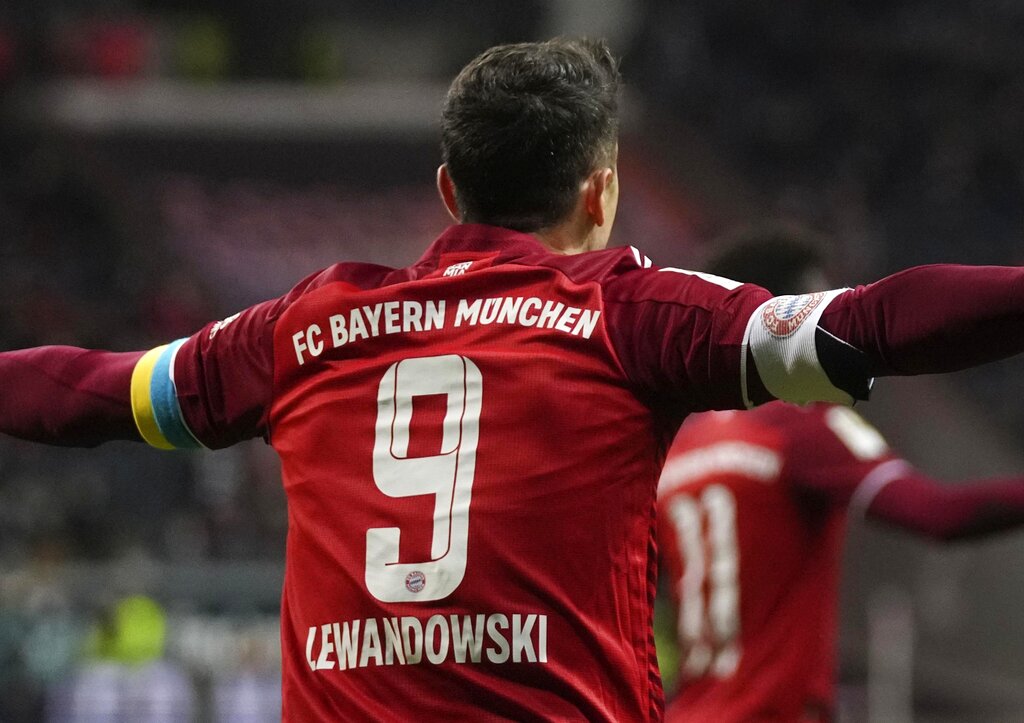 One of the world’s top soccer stars and captain of the Polish national team, Robert Lewandowski, showed solidarity with Ukraine by wearing an arm band consisting of the country’s national colors during Bayern Munich’s league game with Eintracht Frankfurt on Saturday.

Lewandowski was the only player on the field with a Ukrainian arm band, receiving applause and praise from his club’s supporters for the gesture.

The Polish striker took to social media on Saturday to comment on the decision made by the Polish soccer association to refuse to play against Russia in the scheduled World Cup qualifier initially due to take place in Moscow on March 24, stating that he could not imagine playing against Russia at a time when it is engaged in armed aggression against Ukraine.

He acknowledged that Russian players and fans were not responsible for the situation but insisted that athletes “cannot pretend nothing is happening.”

Polish and Juventus goalkeeper Wojciech Szczęsny, who is married to a Ukrainian, has called on soccer’s governing bodies, FIFA and UEFA, to take action against Russia and to exclude it from this year’s World Cup.

The Polish football governing body PZPN has declared that the Polish national side will not play Russia, a stance which has been supported by both the Swedish and Czech associations. This is significant as the winner of the Russia-Poland play-off match was due to meet the winner of the clash between Sweden and Czechia.

Many other countries have now taken Poland’s lead, with the English and Welsh soccer associations confirming on Sunday that neither international team will play against any Russian side, at any level, for the foreseeable future.

International pressure is growing for Russia to be thrown out of the competition and with Poland, Sweden and Czechia refusing to play the Russians, the world’s soccer governing body will have a tricky decision to make.

On Sunday, FIFA backed away from immediately expelling Russia from World Cup qualifying but said it remained an option, deciding instead the squad can play using the “RFU” acronym for the country’s football federation.

FIFA also said the RFU team can play only on neutral territory and without spectators.

The head of the Polish federation PZPN, Cezary Kulesza, responded on Sunday evening to FIFA’s decision, reiterating that Poland “will not play with Russia, no matter what the name of the team is.”

If FIFA rules a walkover for Russia or RFU against the three sides, it may face a boycott by many other European and North American teams, a move that could decimate participation in the World Cup this winter and result in substantial TV and sponsorship income losses for soccer’s world governing body.