Putin: The terrorist murdering Ukrainian hostages in front of the whole world

Like a terrorist, Vladimir Putin has taken Ukraine hostage and is attempting to blackmail the West into fulfilling his demands, writes Polish columnist Grzegorz Górny 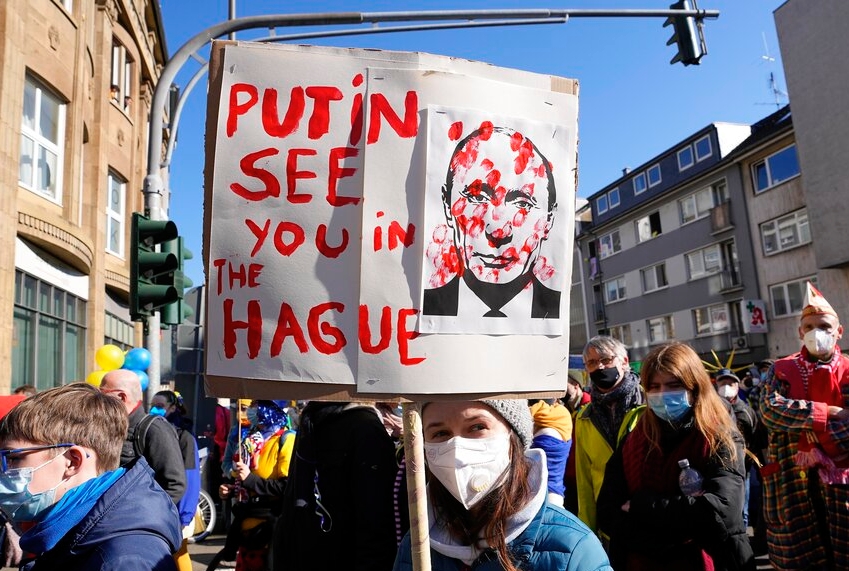 A girl holds a sign reading "Putin see you in The Hague" in Cologne, Germany, during a peace march against the war in Ukraine on Shrove Monday, Feb. 28, 2022. (AP Photo/Martin Meissner)

We all know this plot line from thrillers: a terrorist kidnaps hostages, puts a loaded gun to their head and threatens to kill them one by one until his demands are met. He knows that the other side holds back over the fear of killing of women and children. The terrorist keeps his word and shoots a hostage in the head. Then another one. And another one.

Vladimir Putin is following this blueprint to the letter. He is committing genocide on the defenseless civilian population of Ukrainian cities and promises to stop further murder only if the government in Kyiv agrees to his terms.

Can you imagine a movie in which the terrorist murders half of the hostages and then receives everything that he asked for?

In movies, a psychopath like Putin usually ends up being killed or arrested by the protagonist who defends not only legal order but also morality.

Yet, can you imagine a movie in which the terrorist murders half of the hostages and then receives everything that he asked for? While he wouldn’t kill the other half of the hostages, he would continue to imprison them, and then despite all of that, he would walk away to enjoy his freedom. He may even meet with police officers, prosecutors and judges and make mutual deals with them all.

I don’t think any screenwriter could come up with such a story. Most people would likely dismiss such an idea as unbelievable. No viewer would want to live in a world such as the one shown in this movie.

Nevertheless, life likes to surprise us and reality often turns out to have more depth than fiction.

We’ll see how this turns out in the end.