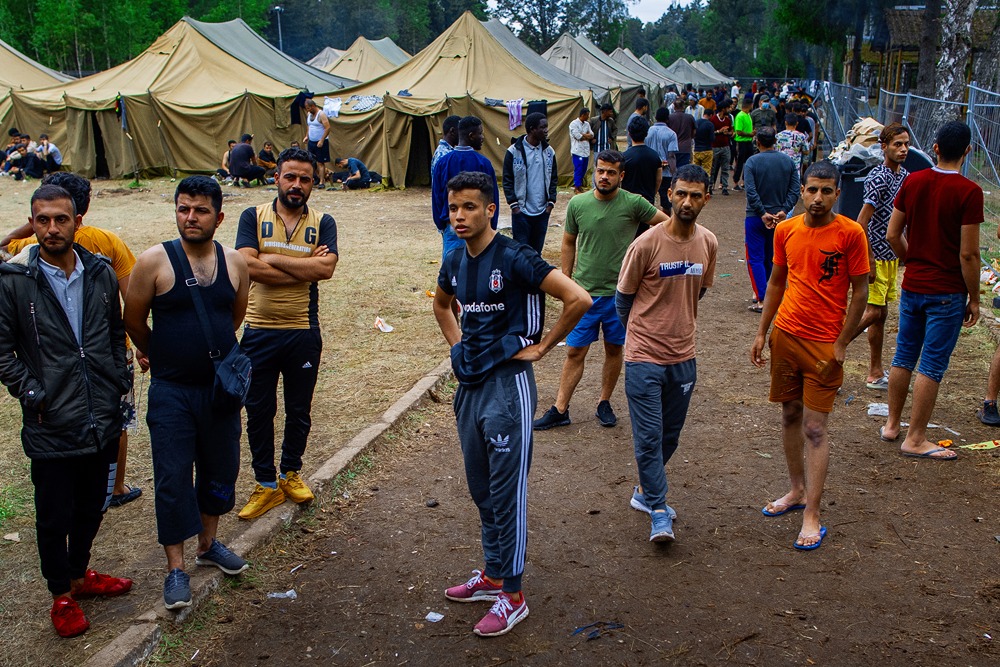 Migrants walk inside the newly built refugee camp in the Rudninkai military training ground, some 38km (23,6 miles) south from Vilnius, Lithuania, Wednesday, Aug. 4, 2021. The Red Cross warned Wednesday that Lithuania's decision to turn away immigrants attempting to cross in from neighboring Belarus does not comply with international law. Lithuania, a member of the European Union, has faced a surge of mostly Iraqi migrants in the past few months. Some 4,090 migrants, most of them from Iraq, have crossed this year from Belarus into Lithuania. (AP Photo/Mindaugas Kulbis)

The conflict in Poland over accepting illegal migrants coming from Belarusian territory continues to be heated. In a rare move, EU officials are supporting the Polish government and the actions it has taken to stymie the flood of migrants.

European Commission (EC) spokesman Peter Stano recently said that the EC was working closely with Polish authorities to support Poland in efficient management of its borders. German officials have emphasized that the borders should be protected as tightly as possible. Frontex representatives have confirmed that if the need arises, they will support Polish services at the Polish-Belarusian border. When asked to evaluate the situation on the Polish-Belarusian border, EC spokesman Christian Wigand said that “we cannot accept any attempts to incite or permit illegal migration to the EU through third countries.”

In an interview for TVP Info, PiS MEP Ryszard Czarnecki explained where this support for Poland stems from five points. He also gave assurances that when it comes to cooperating with other countries, Poland is in a healthy position.

The first point is that compared to the past, the situation is much different and even member state leaders and high-ranking EU officials who heavily supported migration are now clearly against it.

‘They admit that Poland is right in this way, although they do not say so outright. This is the first favorable circumstance for us,” he said.

The second element he pointed to was the fact that the conflict with Belarus concerns not only Poland but also Lithuania and Latvia, and the EU cannot underestimate issues that affect several countries. Moreover, Greece has similar issues on its border with Turkey.

Thirdly, Czarnecki pointed out that the largest cluster of Afghan migrants located near Poland is Austria. Therefore, Brussels is aware that an exodus from Kabul through Warsaw to Vienna is possible. He explained that it is common practice and experience in recent years that migrants flow to countries in which their countrymen are already located. Thousands of Afghan migrants would prefer to join their own people, and there are not many of them in Poland to start with.

The fourth point which the MEP noted was that migration from Afghanistan could lead to further migration from other Asian countries to Europe. This necessitates the EU’s support for Poland.

The final element which Czarnecki drew attention to was that Western European countries are much richer than Poland and are a magnet for migration. Poland is merely a transit country for the foreigners, and their goals are usually Germany, the Netherlands, Austria, or France.

He added that the differences in approach to migration among societies are also relevant. Many arrivals to Europe are probably aware how the situation is perceived in Poland and choose other destinations.

Czarnecki also stated that while Frontex has offered its assistance, the Polish state will most likely not need to use that aid. Whether Poland would invite Frontex to cooperate would be a political decision.