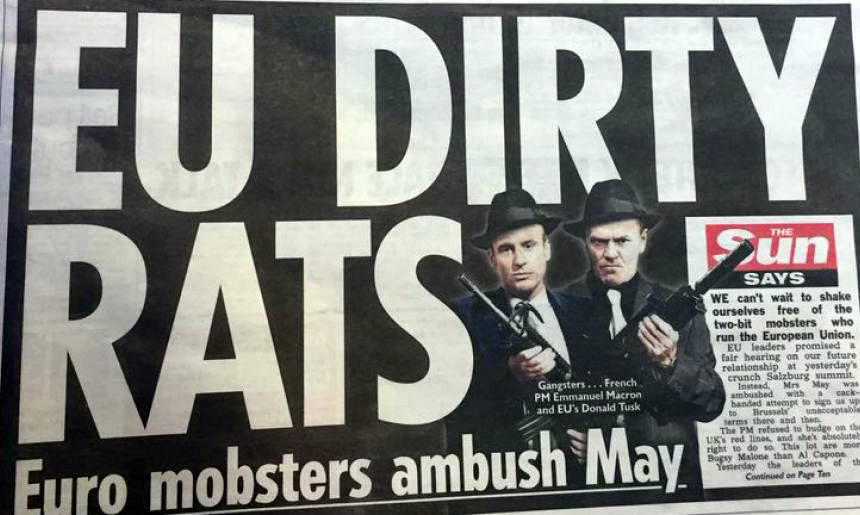 There is a picture on The Sun’s front page of the President of the European Council Donald Tusk and President of France Emmanuel Macron dressed up like gangsters in the style of Al Capone. “They behaved more like gangsters than politicians,” the newspaper writes. The rest of the article is littered with phrases such as “dirty European rats” and “two-bit mobsters”.

During Brexit negotiations, Brussels showed us multiple times why 17 million voted for Britain’s exit, writes The Sun adding that “The European Union is not a grand project meant to unite the nations of Europe, but a method to force ransom.”

This is a reaction to the failed British-EU negotiations during which Donald Tusk rejected the Chequers proposal, which outlined the relationship between London and the EU after Brexit, introduced by Theresa May.

European Union is not a grand project meant to unite the nations of Europe, but a method to force ransom

According to British media, and not just “The Sun”, Her Majesty’s Prime Minister was humiliated in Salzburg by EU leaders. Donald Tusk had stated that the propositions of Chequers “will not work” and had ordered them to be “reworked”.

The President of France, Emmanuel Macron also said that the British proposal is unacceptable and called Brexit advocates “liars” (because they supposedly had said that leaving the EU was easy.)

The British tabloid goes further: “leaders of the undemocratic European Union have shown their true face”. The rejection of the Chequers propositions, may lead to a “hard Brexit” which would entail an immediate end of EU contributions and free flow of goods and products.