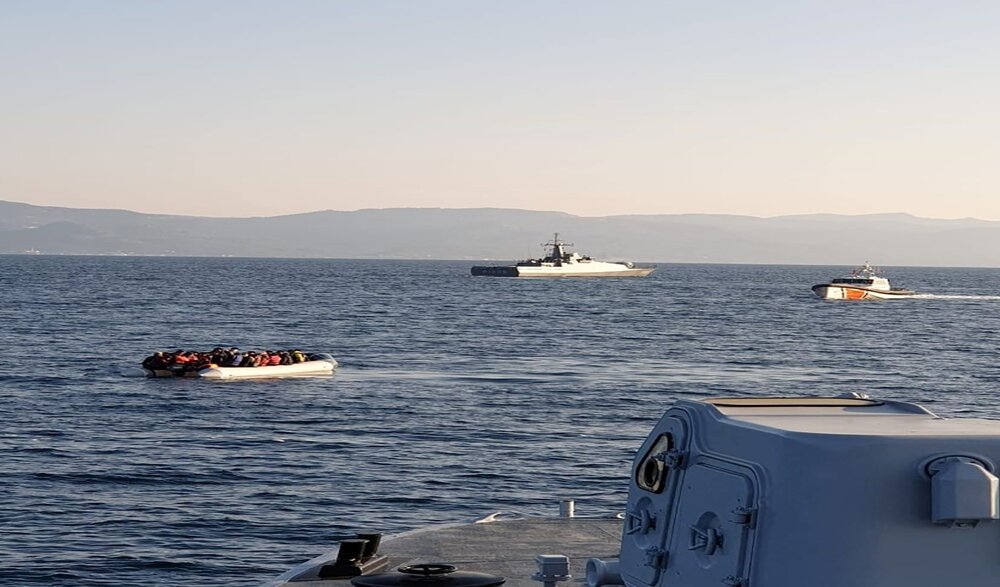 In this photo provided by the Hellenic Coast Guard and taken from a vessel shows a dinghy with migrants, left, with Turkish ships in the background, in the narrow stretch of water between the eastern Greek island of Lesbos and the Turkish coast on Friday, April 2, 2021. (Hellenic Coast Guard via AP)

The Greek Coast Guard has released a video in which the Turkish Coast Guard in the Aegean Sea actively helps migrants to enter Greek territorial waters. Based on the video evidence, the Greek government says Turkey is violating the convention on the detention of migrants on its territory, for which it receives billions of euros from the European Union. Athens is therefore urging Brussels to put more pressure on Ankara.

In the footage, a rubber boat full of refugees is surrounded by several vessels. According to Greece, the video “shows without a doubt how the ships of the Turkish coast guard try to guide a boat with refugees into Greek waters through a dangerous maneuver” at the island of Lesbos.

The Greek Coast Guard then added that, in the end, it managed to push the migrants back, and the boat and its Turkish escort sailed away.

According to the Kathimerini newspaper, the coast guard tried several times to connect with its Turkish counterpart, but with no success. On the contrary, the Turks allegedly tried to intimidate the Greeks.

Greece calls Turkey a “pirate state” because of the events in the Aegean Sea. In the past, Turkish Interior Minister Süleyman Soylu openly said that Turkey will bring down Europe’s governments through mass immigration. His country has already been accused on numerous occasions of pushing migrants into EU territory.

On the other hand, Turkey claims that the Greeks do not cooperate and treat migrants in an inhumane manner. Greek Prime Minister Kyriakos Mitsotakis also faces criticism. The Deutsche Welle news portal reported that Dutch journalist Ingeborg Beugel accused Mitsotakis of “narcissistic abusing” of migrants.

She also said at a press conference that the prime minister was lying that Greece was not forcibly pushing migrants from its borders back to Turkey.

“I understand that in the Netherlands, you have a culture of asking direct questions to politicians, which I respect very much. But what I don’t accept is that in this office, you will insult me ​​or the Greek nation with accusations and statements that are not based on facts,” Mitsotakis responded.

The journalist then described the conditions of refugees in Greece as “terrifying,” to which the prime minister replied that the government stood by its “rough but fair” methods. He had previously appealed to the rest of Europe to help Greece with the difficult situation.

Many of the Greek camps that house migrants have been burned down by the very same migrants living in them, often with the goal of forcing other EU countries to take them in. These arson attacks have made the situation for Greek authorities even more difficult.