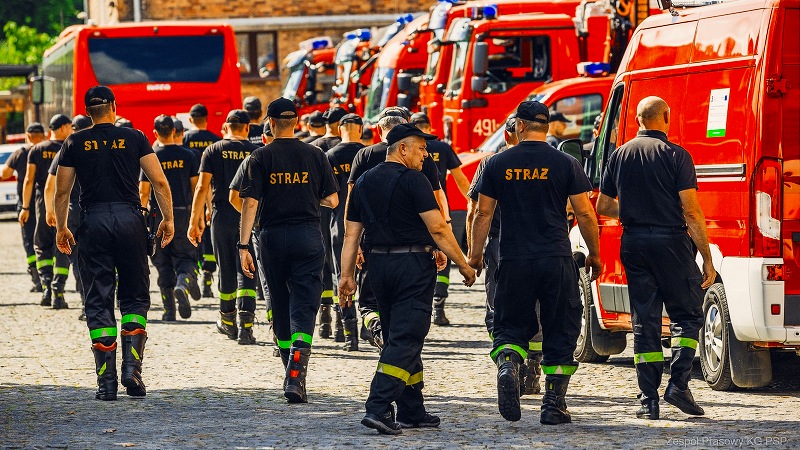 The Polish firefighters traveled to the Peloponnesian region in Greece on Saturday from Warsaw after a briefing and equipment check-up. Prime Minister Mateusz Morawiecki officially ordered the whole operation. A total of 143 firefighters and 46 vehicles were sent to Greece – these are two modules meant to extinguish wildfires from the ground using vehicles. The call for aid was received via the Emergency Response Coordination Center (ERCC). The Polish aid team included forces from several voivodeships.

Polish State Fire Service deputy commandant Adam Konieczny explained that the mission will last until August 23. He noted that the Polish firefighters were ready to travel only six hours after the minister of the interior’s decision was made, which emphasizes that their operational efficiency was reached incredibly quickly.

“This is a very difficult mission due to it being a wildfire. We want to use the strength and resources of the Greater Poland fire brigade because their experience is crucial,” said Konieczny.

The wildfires which have been ravaging regions North of Athens have already claimed the lives of two people and thousands have been evacuated. Greek firefighters are combating the disaster in 154 locations throughout the country. The fires were as close as 20 kilometers from Athens.

Greek PM Kyriakos Micotakis declared that the current heatwave has turned Greece into a gunpowder barrel.

Greece is not the only country which Polish services are supporting. Also on Saturday, a police S-70i helicopter left a Warsaw airport to travel to Turkey to help extinguish fires on the country’s southern coast. The Polish Police Headquarters said that there were eight police pilots and three firefighters on board of the helicopter.

Another three-man firefighter brigade left for Turkey on Friday. The team will supply equipment necessary to extinguish wildfires from the helicopter, including a large 3,000-liter water tank (a smaller 1,500-liter water tank is located on the helicopter). They are already in operation in Turkey, the National Headquater of the State Fire Service posted on Twitter.

“Turkey 2021. Polish firefighters and police pilots have just completed the first day of their extinguishing actions. They will return to fighting tomorrow.”

On Sunday, a Polish firefighter convoy reached Germany and will assist the German region of Rhineland-Palatinate, which has been struck by floods. The transport includes 138 air dehumidifiers from the resources of the Government Strategic Reserve Agency.

Title image of Polish firefighters getting ready to travel to Greece. (source: press office of KGSP)