The leaders of Poland, Germany and France presented a united front in Berlin concerning the crisis surrounding Ukraine 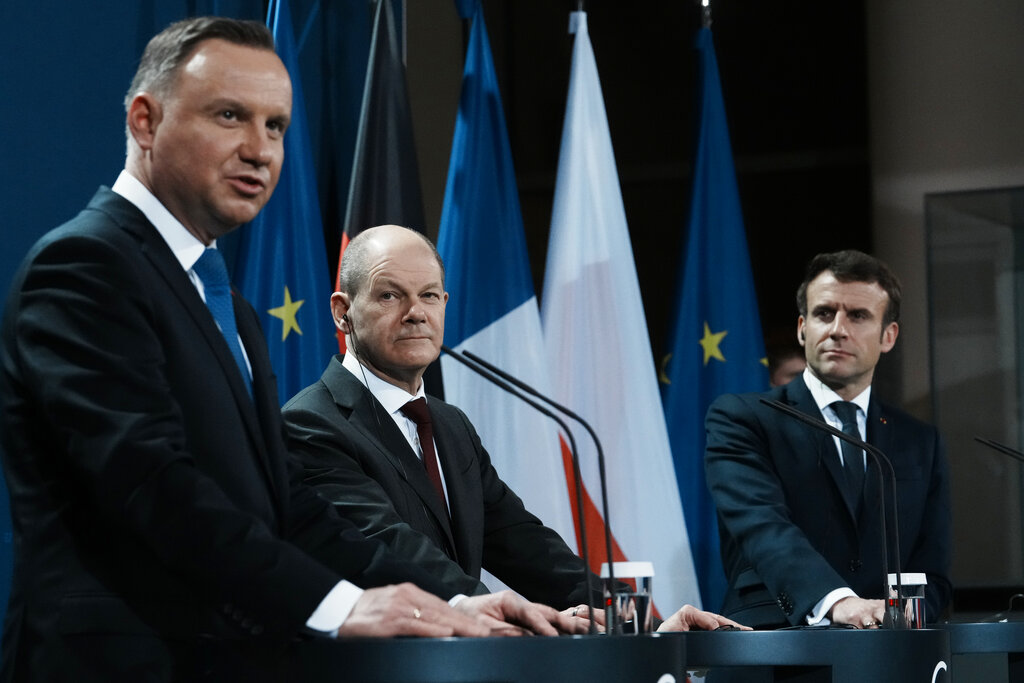 The heads of state of the Weimar Triangle emphasized the importance of cooperation between the three countries during a meeting in Berlin on Tuesday.

The current crisis on Ukraine’s border with Russia was top of the agenda as the German chancellor and the two presidents of France and Poland announced a common position, issuing a statement denouncing Russia’s aggression and warning of the ramifications of further violations.

“Our evaluation of the situation is identical, as is our position,” declared German Chancellor Olaf Scholz. “Further violation of the territorial integrity and sovereignty of Ukraine is unacceptable and will have political, economic and probably geostrategic consequences.”

The German chancellor underlined that the three countries were united by a common goal: to maintain peace in Europe through cooperation and diplomacy.

Polish President Andrzej Duda stressed that the current situation was the most difficult one that Europe had found itself in since the early 1990s.

“We are dealing with an unprecedented gathering of Russian troops along the Ukrainian border,” he told reporters. “We are all asking ourselves the same question: what will happen next.

“It is our great mission to ensure peace and security to our nations and also defend international and the territorial integrity of countries which are neither NATO or EU members, but are still our allies,” Duda added, insisting that much could be achieved by showing that countries could work together.

“We must find a solution to avoid war. This is our foundational mission and I believe that we can achieve this. Today, the most important things are unity and solidarity,” he stated.

French President Emmanuel Macron participated in the summit following his talks with Vladimir Putin in Moscow on Monday, and noted that the Weimar Triangle was currently comprised of three countries which led three different organizations — France had taken over the EU presidency; Germany was leading the G7 and Poland had taken over the chairmanship of the OSCE.

Macron highlighted that there had been much debate over peace in Europe in recent weeks and declared that the Weimar Triangle leaders would continue to appeal for a diffusion of the situation.

“We will continue to act in the upcoming weeks. The goal is simple – to avoid war. Peace and stability are the most important for our continent. We must strengthen Europeans’ unity which is why we have this kind of format for meetings,” he said.