Poland is becoming a frontline country

Russia is forcing a revision of the rules of the post-Cold War international order and Poland’s future depends on the West’s response, writes Marek A. Cichocki 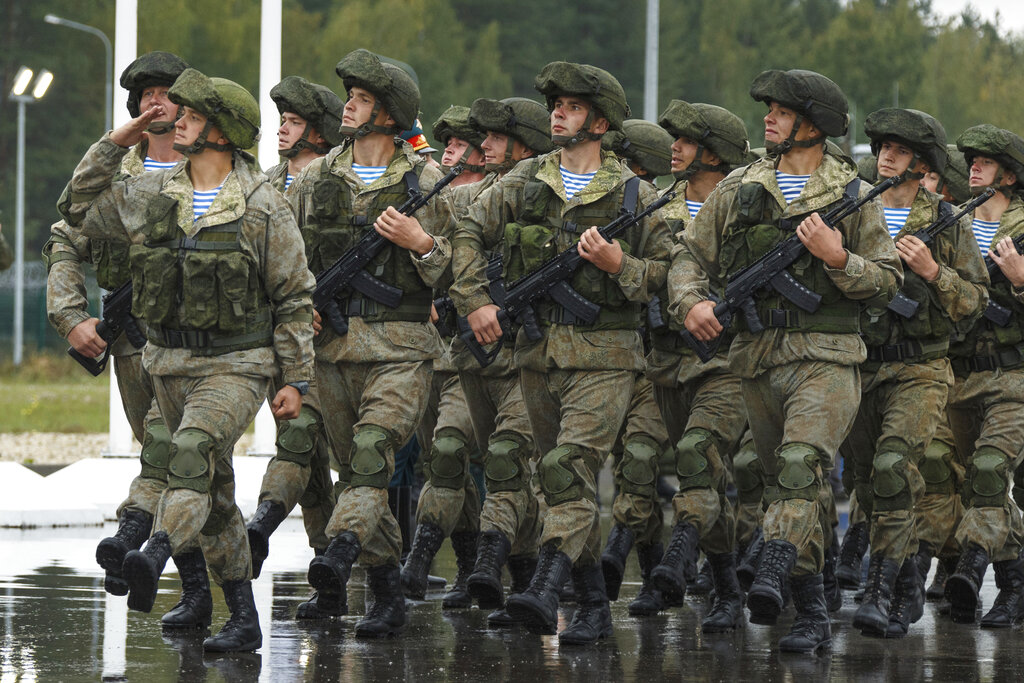 In this photo provided by Russian Defense Ministry Press Service, Russian paratroopers march during the opening ceremony of the joint strategic exercise of the armed forces of the Russian Federation and the Republic of Belarus Zapad-2021 at the Mulino training ground in the Nizhny Novgorod region, Russia, Thursday, Sept. 9, 2021. (Vadim Savitskiy/Russian Defense Ministry Press Service via AP)

It is undoubtedly true that any real potential of changing the current world order lies with China. Yet, it seems that Russia is the power increasingly determined to carry out irreversible acts designed to rewrite the rules on which the last 30 years of the post-Cold War international order have been built, especially in Europe.

Whether we are dealing with some planned division of labor around upsetting the post-Cold War order between Moscow and Beijing remains unclear.

However, as time goes by, it becomes increasingly obvious that the start of Russia’s aggressive actions began in 2008.

“A Little War That Shook the World” is how Ron Asmus, a deceased American diplomat, entitled his book, which described the Russian invasion of Georgia. I remember the critics of the book, for whom the connection of Georgia with the European security system following the Cold War was incomprehensible. They also believed that Asmus was exaggerating by attributing too much importance to what, in their opinion, was a marginal conflict.

Thirteen years later, Vladimir Putin is preparing to carry out the “Georgian scenario” on an incomparably larger scale towards Ukraine. In this manner, Russia is closer to achieving its goal than ever before: to destroy the post-Cold War order based on everyone respecting the same rules such as human rights, individual freedom, the right of nations to self-determination and territorial integrity.

Russia is close because there is no longer is certainty whether the West — the current American administration but also Berlin and Paris — will consider using those rules as a subject for new negotiations with Russia instead of defending them.

Our future in Poland depends on which decision will prevail. For a significant part of Polish society and politics, it will be a shock, and I have no doubts that many will simply refuse to accept obvious facts.

Nevertheless, in an “optimistic” scenario, Poland will bear the burden of a frontline country which will demand a huge effort from Poles, and it is unknown whether we are capable of doing so.

There is also a worse scenario and one that is no less likely, which involves our entire region becoming an area of growing destabilization and external rivalries which will not benefit our interests.