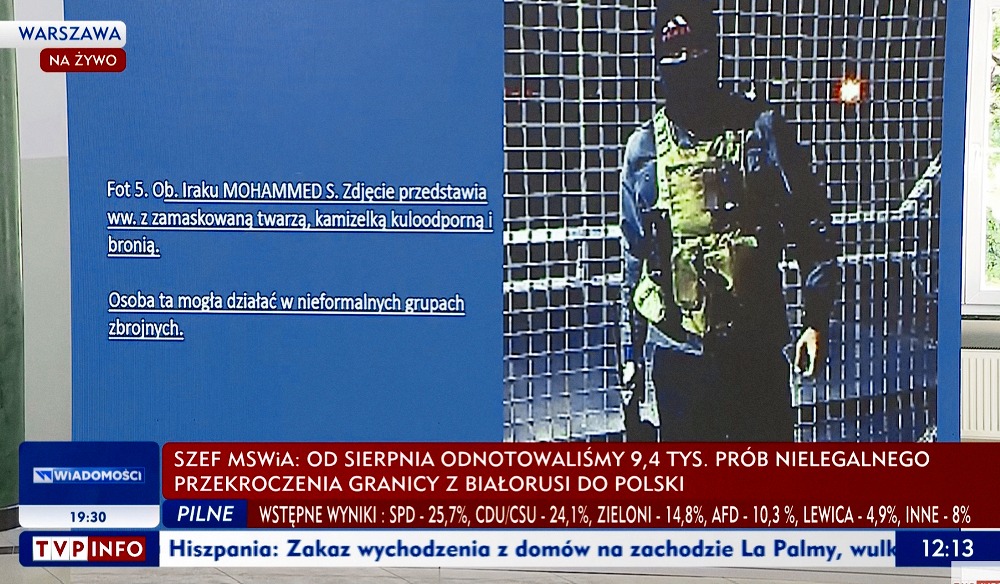 The Polish government is not only fighting an external enemy when it comes to the migration crisis, but also parts of the Polish liberal left, writes Marek Pyza for portal wpolityce.pl

It is confirmed (again): Polish authorities are not just fighting an external enemy preparing provocation after provocation on the border in order to destabilize Poland. There is the additional challenge of a war declared against Poland by the liberal left. There is no low they won’t stoop to, as long as they can damage the Polish government.

The information presented on Monday by Minister of the Interior Mariusz Kamiński is truly shocking. It turns out that at least a quarter of the illegal migrants detained in recent days are potential Polish security threats. These include radical Islamic and terrorist associates, as well as collectors of photos from executions, pedophiles, and even perpetrators who participated in bestiality.

Several migrants who played the role of exhausted refugee in border forests were ordinary tourists in Russia not so long ago (some were even residents). They flippantly took photos of themselves under the Kremlin and attended football matches.

Immediately, of course, critical voices suggested that publicizing the photos from migrants’ phones was an unacceptable low blow.

German-owned liberal portal Onet told Minister Kamiński a story about a dead 16-year-old meant to show the soullessness of Polish authorities and the tragedy of the “refugees”. This story was most likely fake and prepared by Lukashenko’s regime.

Father Tomasz Dostatni also added his own thoughts in Gazeta Wyborcza, convinced that we would find the “face of Christ” in the migrants. If this wave of illegal migrants was let into Poland in accordance with the opposition’s wishes, then we might have enough bad luck to see the face of Christ ourselves, due to the actions of an ISIS sympathizer.

Anita Karwowska, however, was the best example of Gazeta Wyborcza’s strategy:

“There is to only be hatred. More and more hatred — towards ‘perverts,’ ‘drug addicts,’ ‘terrorists,’ and ‘agents’ This is the message from the borders that we are meant to accept,” she added.

Given all of these claims, we have a good argument to not allow the press near the border. Yet, we should keep these opinions and statements in mind, as they make clear the intent of liberal media: to idealize and sanctify illegal migrants.

There are to be no doubts about the identities and intentions of the illegal arrivals. Authorities are not meant to look into their connections with terrorism or other criminal acts and any information discovered about their criminal activities is not to be published. The government is not built in order to swiftly identify the perverts, drug addicts, and terrorists trying to illegally break into Poland. In fact, there is not meant to be any substantial discussion about the rights of Poles and security in their own country.

We are meant to believe Putin and Lukashenko, not Morawiecki and Kamiński. There is meant to be hatred and even more hatred towards the Polish government.

Is there better evidence today that these “comrades” want to introduce a Russian order in Poland?