US ambassador to Warsaw: Poland is a humanitarian superpower

“War in Ukraine brought despair and anger, but the West is united as it never was,” says Mark Brzezinski, U.S. ambassador to Warsaw 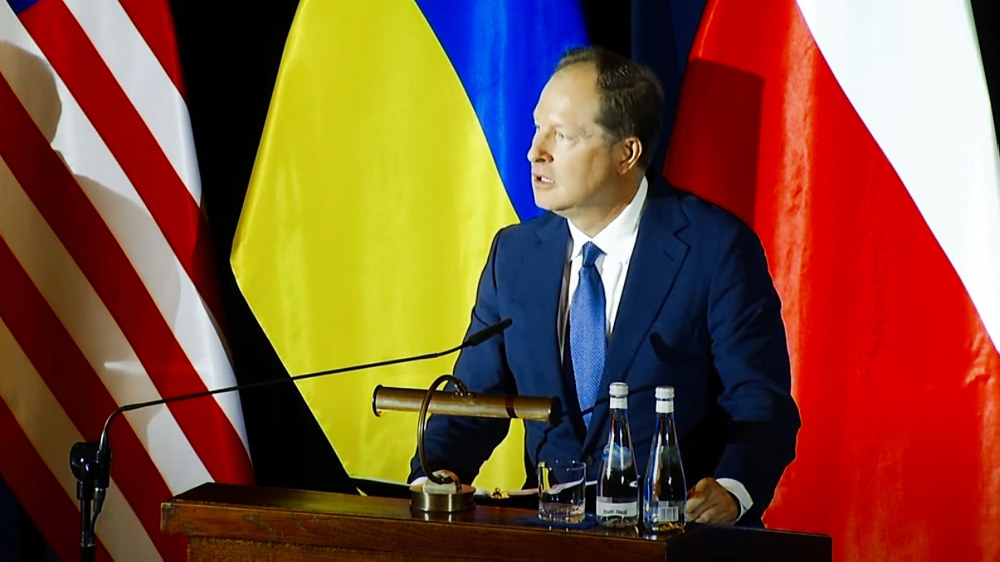 During a lecture at the University of Warsaw on the conclusions from the conflict in Ukraine for world leadership, he put Russian President Vladimir Putin and Ukrainian President Volodymyr Zelensky against each other, stressing that the latter had “redefined the way nations respond to the conflict” due to his close relations with Ukrainians and the way he communicates with his countrymen and leaders of other countries.

Brzezinski said that Putin’s leadership is based on fear, lies and brutality, humiliation, blind loyalty, and obedience. He pointed out that Putin’s government is using “prisons, humiliation and other ways to silence those who do not wish to follow him,” and reminded those present that Putin and many people expected Zelensky to evacuate together with his family, to rule in exile — instead, when offered an easy departure from the country Zelensky replied that he “needs ammunition, not a ride.”

“Despite his right to be justifiably concerned for his life, he showed loyalty. People see a patriot and fighter, a husband and father. He built a bridge between a leader and citizen,” said Brzezinski, who also referred to the bravery of Kyiv Mayor Vitali Klitschko and Ukrainian Ambassador to the U.S. Oksana Markarova.

“Vladimir Putin brought conflict upon Europe once again. He started an unjustified war against innocent people, who want to live in peace. We saw darkness, despair, terror, sadness and anger, but we also saw hope and the West united as it never was,” Brzezinski claimed.

The U.S. ambassador to Poland discussed the sanctions imposed on Russia, Germany’s abandonment of the Nord Stream 2 project, the EU’s struggle to gain energy independence from Russia and the debates in Sweden and Finland on joining NATO. Brzezinski noted that Joe Biden’s administration spent $3.3 billion on aid for Ukraine and that the United States shared intelligence about the offensive nature of Russian exercises with Ukraine and allies.

“America — I can say this with pride — is fulfilling its part,” Brzezinski added.

He pointed to Biden reiterating that NATO’s Article 5 is a “sacred commitment,” and that the U.S. is ready to defend every inch of member states’ territories. The ambassador also noted that U.S. troops were deployed in Europe, where equipment necessary for aiding their NATO allies is also stationed. “We are getting ready for absolutely every contingency,” he assured.

“Poland is considered to be a humanitarian superpower, I am proud to be a U.S. ambassador to a humanitarian power,” said Brzezinski. He pointed out that Poles had opened their homes to many refugees, and thanked those who had organized themselves using social media to receive people fleeing the war on the Polish border.