In an exclusive interview with Remix News, Jorge Buxadé, who is the vice-president of Spain’s Vox party and leader of the Vox delegation in the European Parliament, explains why his party did not participate in the Conference on the Future of Europe, why Poland and Hungary are constantly under attack, and what will change in Spain’s attitude towards Brussels when Vox eventually becomes part of a government at the national level 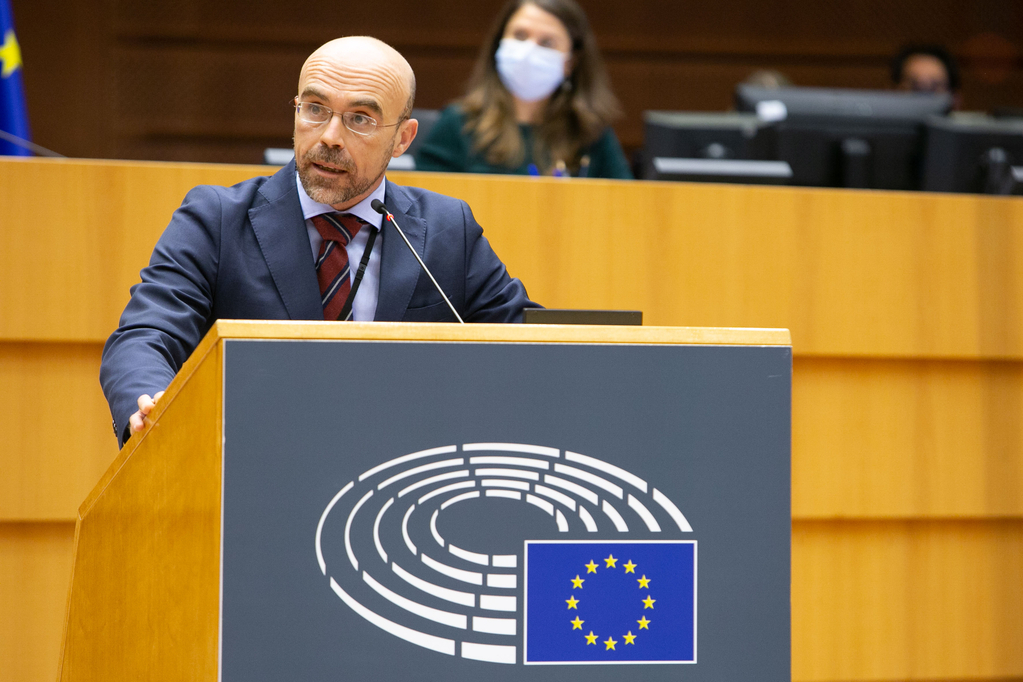 "What they want is to change the governments of Poland and Hungary, and that is why when the Polish people or the Hungarian people give their votes to Mateusz Morawiecki and Viktor Orbán, they reject that as undemocratic," says Spanish MEP Jorge Buxadé

Why did Vox not participate in the Conference on the Future of Europe, whose conclusions were presented in the European Parliament on May 9?

I am a member of the Committee on Constitutional Affairs and I asked at the beginning of the process to participate but I was unable to do so because of the gender rules. They needed me to be a woman, and I am of course a man, and that is why I could not participate. On May 9, we did not participate in this unacceptable spectacle that took place in the European Parliament because already last week, Vox, together with the entire European Conservatives and Reformists Group, rejected the conclusions of this Conference on the Future of Europe. Fundamentally, it is an anti-democratic process whereby the opinion of a few, chosen by globalist forces under pressure from lobbies, is passed off as the opinion of the citizens.

Who did actually choose this conference’s participants?

It was the team that organized the Conference on the Future of Europe, in which the figure of Guy Verhofstadt, the most distinguished federalist and anti-nation MEP we have in the European Parliament, stood out. It has been a perfectly directed and orchestrated process from A to Z, its conclusions were already written from the beginning by those whose purpose it is to provoke a change in the treaties, a change in the structure of the European Union, to continue taking competences away from the member states, to create new European bodies and agencies, and above all to put an end to the unanimity rule.

During the week preceding the presentation in the European Parliament of the conclusions of the Conference on the Future of Europe, there was an umpteenth debate on Poland and Hungary, with a vote on a motion to again criticize these two countries and call for sanctions. How do you explain the obsession a majority of MEPs seem to have with these two countries?

The federalists, the globalists, and the Brussels oligarchies do not accept diverging opinions. Just as they want to keep the Identity and Democracy Group, or parties such as Vox, behind a cordon sanitaire, they also want to create a cordon sanitaire around the governments of Hungary and Poland. It is an absolutely totalitarian pretension on the part of those false elites in Brussels. It is pure ideology. They do not accept the sovereignty of Hungary and Poland, of their parliaments and their governments, as will unfortunately also be the case with Spain if in the future Vox becomes part of a national government, as it certainly will someday. It has nothing to do with the rule of law.

I believe that the left and liberals in the European Parliament will reject any Spanish government Vox is part of and any Italian government with Fratelli d’Italia, for example, just as they do with Fidesz in Hungary and the Law and Justice party in Poland. They do not accept that there are millions of Europeans — and their numbers are on the rise — who are not in favor of the Brussels institutions’ federalist drift, and who want a different European Union that respects the member states, that respects sovereignty, and that cares about the really important things which are those that affect the four freedoms. We must constantly remind ourselves that the European Union is based on guaranteeing these four freedoms, on protecting the European economy, the principle of community preference, and, within the principle of community preference, the principle of national priority.

It seems to me that in the midst of the Ukrainian refugee crisis and with the war in a country neighboring Poland and Hungary, it was a very bad time to attack them again on the rule of law, LGBTI laws, and abortion.

They don’t care about that. In reality, the Brussels institutions have been accumulating crisis after crisis. We started with the 2004 European constitution crisis and then came the euro crisis, the refugee crisis, the Covid-19 crisis, the energy crisis, and now Ukraine… It is just one crisis after the other. And what they do is they hide their mistakes behind a permanent attack on Poland and Hungary. What they want is to change the governments of Poland and Hungary, and that is why when the Polish people or the Hungarian people give their votes to Mateusz Morawiecki and Viktor Orbán, they reject that as undemocratic. As a matter of fact, those who act in a radically undemocratic way are those elites, the oligarchies of Brussels, and they do so because these national parliaments claim respect for their nations, their laws, their traditions, and their culture. This is what Vox also demands for Spain.

One of the things that is strongly criticized by the European Commission still blocking Next Generation EU recovery funds is the Hungarian child protection law that was adopted last year. It seems to me that Spain would also need such a law now. Do you believe that to be the case?

Yes, of course. Spain also needs a law that gives back to parents the leading role in the education of their children and that guarantees that intimate matters such as the sexual education of their children are not carried out by ideological lobbies with very specific interests. Parents love their children the most. They have a duty to educate their children in accordance with their own convictions. Vox also advocates that lobbies should not enter classrooms to indoctrinate children in Spain. It is a question of fundamental rights and it is a question of non-interference by lobbies in laws passed by national parliaments.

In Castile and León, the PP now governs with Vox. Does this mean that there will be no new attempt to impose a law providing for LGBTI indoctrination and gender ideology in schools? There was such an attempt with the previous governing coalition formed by the PP and the centrist liberal Ciudadanos party…

Indeed, this is a fundamental issue. Our coalition agreement with the PP guarantees that the freedom and rights of parents as well as the right of children not to be indoctrinated by lobbies in the schools of Castile and León will be respected.

Would such a PP-Vox coalition be possible in other regions such as Andalusia after the elections due to take place in June, and perhaps at the national level as well?

We have clearly stated that we will never support a left-wing government in Spain. In Spain, we have the most radical left in Europe, a left that makes pacts with communism and pacts with separatism that wants to break up Spain. And therefore, we have our hand outstretched to the Popular Party, not only to govern together but also to change the left-wing policies that have been dominant in Spain for the last 40 years or more. Therefore, it is the Popular Party that will have to decide in each case whether it prefers to join the alternative that is Vox, or, on the contrary, it prefers to make a pact with the Socialist Party. We trust that the PP will understand what Spaniards want and need and will join our political alternative.

What would then change in Spain’s attitude in Brussels? Would a Spain governed by a PP-Vox coalition be more of an ally of Poland and Hungary, for example concerning the need for the EU institution to better respect national sovereignty or in the field of immigration policies?

I believe this would be fundamental. It would be essential to go to Brussels with demands, to go to Brussels to defend the interests of the Spanish people. There are two very important issues and these are the ones you have pointed out. The first is the respect for national laws, for sovereignty, which is evidenced for example in food sovereignty, protecting our farmers from agricultural products produced abroad that compete unfairly with them. The second is the need to protect the southern border. Europe’s southern border is being threatened by massive illegal immigration and human trafficking mafias. I believe that these are two issues in which the voice of Vox in the institutions in Brussels would be very important to promote an alternative to the federalist and globalist objectives that have been prevailing in Brussels. Undoubtedly, Vox would join all those governments that want to build a strong Europe based on the respect for sovereignty, national constitutions, and the member states’ competences.