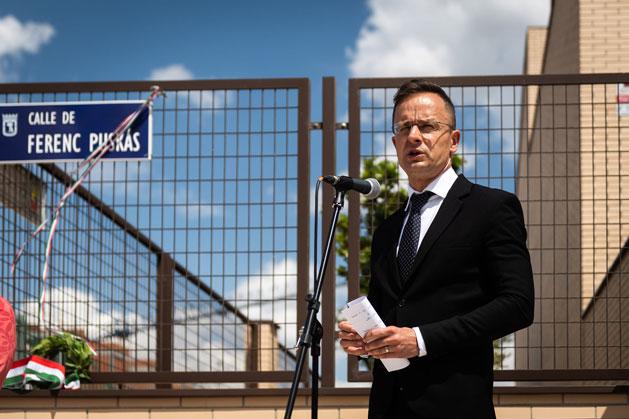 Hungarian football legend Ferenc Puskás (1927-2006) had a street named after him in Madrid, where he was a key player of the first great generation of Real Madrid, daily Magyar Nemzet reports.

“We are proud of Ferenc Puskás as the best-known Hungarian who made his career extremely successful in a historical period full of difficulties and challenges,”  Minister of Foreign Affairs and Trade Péter Szijjártó said at a short ceremony in Madrid’s eastern Vicálvaro district, where the street sign named after Ferenc Puskás was unveiled.

Szijjártó spoke about the fact that although Puskás died 15 years ago, he is still remembered all over the world. He praised the performance of “the best footballer of the era” and recalled his unbeaten record, saying that one else has been able to score four goals in the European Championship or in the Champions League final.

Szijjártó said Puskás is the connecting link between the Spanish and Hungarian nations, and also thanked the Spaniards, Real Madrid and the city of Madrid for keeping their memory alive.

“We are very proud that we now have a street that will make the figure of Ferenc Puskás memorable forever,” Butragueno added.

The ceremony was also attended by the grandson and great-grandson of Puskás, as well as Amancio Amaro, former Real Madrid striker who played with the well-known Hungarian legend, nicknamed “Pancho” in Spain. Puskás came to Spain after the defeat of the 1956 Hungarian anti-Soviet uprising, and he played with Real Madrid from 1958 to 1966.