Kaczyński: €600 billion in infrastructure and energy financing will unite Central and Eastern Europe

More than half a trillion euros is available to unite Central and Eastern Europe through the Via Carpathia project, which is one of the biggest infrastructure projects in the world 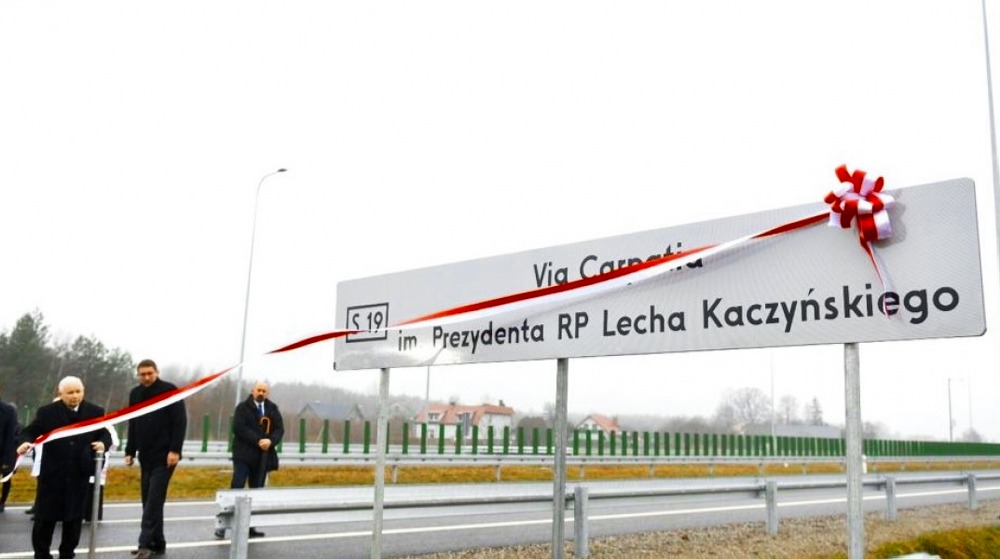 Four new sections of the Via Carpathia highway in Poland — a massive project designed to link all of Central and Eastern Europe along its north-south axis — have been officially opened in a formal ceremony.

The expansion will see the expressway extended by 50 kilometers, linking Kraśnik to Janów Lubelski and Lublin to Niedrzwica Duży. The Polish portion of the expressway is only a small section of the total, which will stretch from Baltic Sea to the Black Sea.

Poland’s conservative ruling party Law and Justice (PiS) leader Jarosław Kaczyński, the brother of Lech Kaczyński, who died tragically in the 2010 Smolensk plane catastrophe, attended the naming ceremony and emphasized the importance of the Via Carpathia to the region’s development.

“Today, an ambitious plan worth €600 billion exists to turn the Intermarium into an actual whole. This route is an element of this plan. This is the reason why this road should bear the name of Lech Kaczyński,” he said, confirming that the Polish part of the road was to be named after former President of Poland Lech Kaczyński.

The Intermarium is a historical term referring to the region of Central and Eastern Europe that include Estonia, Latvia, Lithuania, Poland, Czech Republic, Slovakia, Austria, Hungary, Slovenia, Croatia, Romania, and Bulgaria.

“We have showed that a different way of ruling is possible. Lech Kaczyński had shown in the past that an entirely different kind of policy could be conducted, completely in opposition to the previous one in many areas,” he stated.

Jarosław Kaczyński explained that these areas included foreign policy, developing Polish energy security and the establishment of a plan to ensure that the integration of Central and Eastern European countries was carried out in a practical manner through an economic dimension. He added that the plan initially concerned energy but was later expanded to include roads and infrastructure.

Polish Infrastructure Minister Andrzej Adamczyk emphasized that the Via Carpathia is meant to be a catalyst for accelerating economic development in the entire region, confirming that the entire route from the south of Poland to the north should be completed by no later than 2026.

The Via Carpathia is an international highway designed to accelerate economic development in certain Polish regions. The entire length of the route in Poland will be 200 kilometers.

The idea to create the highway was first presented by the ministers of Lithuania, Poland, Slovakia, and Hungary in 2006 in Łańcut under the patronage of former President Lech Kaczyński.