The U.S. media conglomerate Discovery could be seriously affected by the new Polish media law 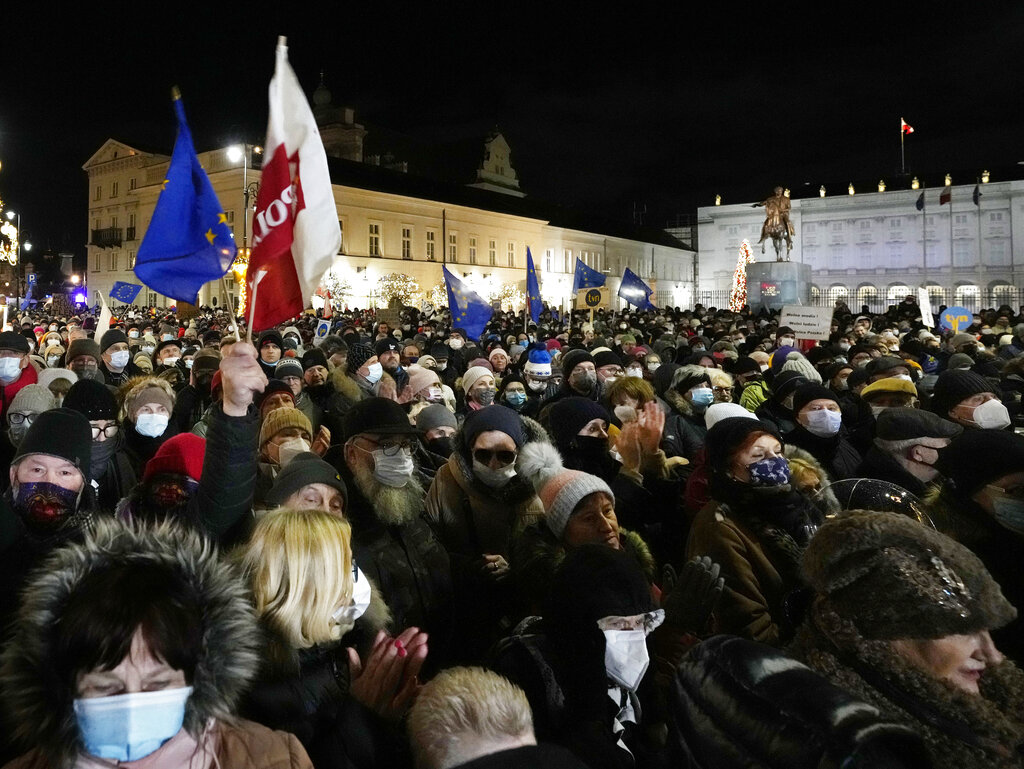 People demonstrate after the Polish parliament approved a bill that is viewed as an attack on media freedom by liberal opposition, in Warsaw, Poland, Sunday Dec. 19, 2021. (AP Photo/Czarek Sokolowski)

The Polish parliament voted on Friday in favor of a media reform bill which will ensure all outlets wishing to hold broadcast licenses in the country are majority-owned by entities from the European Economic Area.

Following parliament’s approval, the draft bill will now be passed on to Polish President Andrzej Duda to sign off on.

The restrictions on foreign ownership of media companies in the country will have real consequences for U.S.-based Discovery, which currently holds a majority stake in TVN, Poland’s largest liberal broadcaster. The American firm may be forced to sell its stake in the network after the new law in Poland passed.

TVN is formally owned by a Dutch-registered company that in turn is owned by Discovery.

On Sunday evening, a few thousand opponents to the bill — comprising mainly of left-wing TVN supporters — protested in front of the Presidential Palace in Warsaw and across several Polish towns, demanding that the president veto the proposed legislation.

Following the parliamentary approval of the reforms, U.S. chargé d’affaires Bix Aliu — who is heading the American embassy in Warsaw until a new ambassador is appointed — announced that “the United States is extremely disappointed by passage of the media bill by the Sejm.”

Commenting on Aliu’s statement, Law and Justice (PiS) MEP and professor Ryszard Legutko claimed that “in Poland, American ambassadors (and also some German ambassadors) have behaved and continue to behave very brutally — almost in the same way that Soviet ambassadors had behaved in the past.”

He pointed out that they criticized and even sometimes resorted to threats, as well as supported activities opposed to the Polish government, such as LGBT parades.

“These behaviors are not flattering. But on the other hand, we cannot allow for Polish internal policy to be conducted under the dictate of countries with which we have relations and connections. Sometimes better ones, sometimes worse, but we treat them as partners,” Legutko explained.

The professor noted that no Polish ambassador in the United States had tried to officially or publicly scold the United States’ ministers, direction or policy. If there had been any attempts to influence these issues, then they were being done very discreetly.

He underlined that when it came to the issue with the media reform bill and its impact on Polish-American relations, “the priorities of American policy would be crucial.”

“American policy is currently in a state of chaos. The President of the United States does not have any control over what is going on. The vice president has been hidden because she has been annoying the electorate to such a massive degree, including those who voted for the candidate of the democrats,” he said.

The professor stated that the U.S. State Department was to a large degree aligned with the left, which he said is why it is difficult to evaluate the whole situation. He declared, however, that Poland should conduct its internal policy in a sovereign, independent manner.

“In international relations, one must adhere to the rule of balance and mutuality,” Legutko added.