Where is the feminist outrage over Afghan migrant stabbing a German woman for ‘working’?

The attack in an otherwise peaceful Berlin park seems to not concern German feminists, the media, or worst of all – politicians 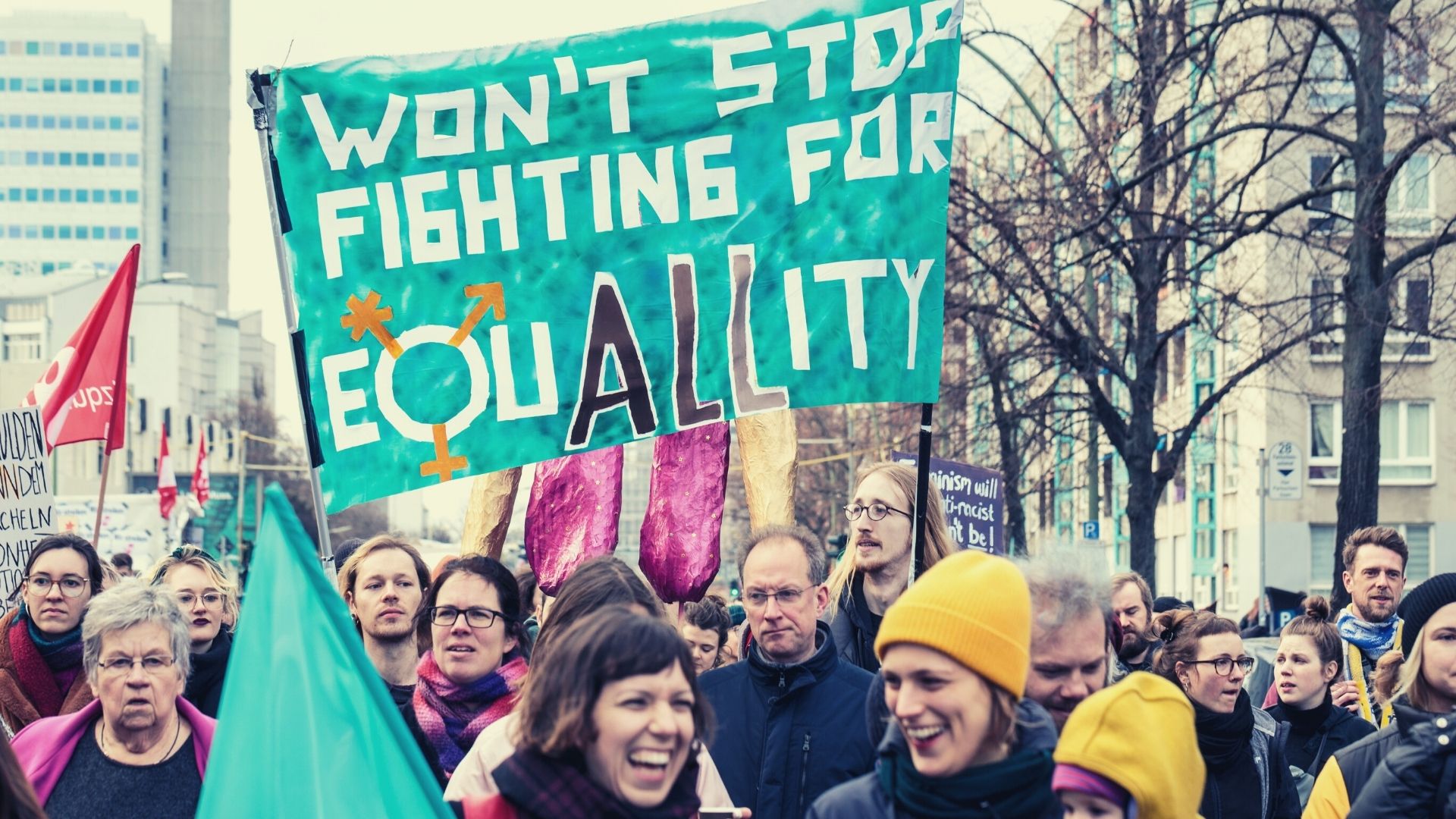 Any scenario in which a White Neo-Nazi or “incel” stabs a woman nearly to death merely for “working” would elicit outrage in Germany — and rightfully so.

After the attacks, extensive media coverage would undoubtedly follow, along with German politicians racing to be the first to offer their condemnation — again, rightfully so. Commentators would decry toxic masculinity, the danger of the White male patriarchy, and demand increased funding to fight right-wing terrorism and violence against women. Left-wing groups would also surely mobilize protests of their own.

Last week, an Afghan refugee stabbed a 58-year-old female gardener in the neck multiple times, then proceeded to stab an elderly man trying to intervene. The perpetrator told the police afterwards that he stabbed her because she was working, and that he did not approve of women working.

The attack has elicited little in terms media commentary in Germany, let alone outrage. From any point of view, the attack is abhorrent, but from the feminist perspective, it could not be a more clear case of misogyny: a woman attacked at random simply for doing her job.

Yet prominent German feminists, such as Margarete Stokowski and Sophie Passmann, are notably silent. They did not say a word in response to a woman being brutally stabbed simply for “working”, despite their usual habit of commenting on every triviality or microaggression on their Twitter accounts. The German media has been remarkably quiet as well, running short news blurbs such as Deutche Welle’s English-language headline: Berlin: Man attacks woman with knife for ‘working’. Even less content is provided in German-language pieces, such as the Focus headline, “Man stabs female gardener in the neck multiple times in a park – motive still unclear”

The reality is that this is not merely a case of a random “man” stabbing a “woman” — according to the police, the man stated a clear motive for the attack. What we know for sure is that this type of attack is not alien to Afghan society or its people. Only by acknowledging this fact can there be an honest discussion about the consequences of mass migration from countries that not only treat women in abhorrent ways but feature a broad range of cultural practices, ranging from corruption to extremist religious views, that are anathema to the way the West organizes its own societies in the modern world.

Despite claims of the White male patriarchy that permeate the media and academia, the brutal discrimination against women and extreme patriarchal societies of the Middle East, Central Asia, and many parts of Africa, is the everyday reality for much of the world’s female population. The empowered blue-check women of Twitter, many of whom envision a “Handmaid’s Tale” apocalypse occurring in the most feminist countries in the world, such as Sweden or Germany, refuse to devote their attention to the countries where this apocalypse is actively occurring and has been occurring for centuries. In Afghanistan, these same women would have no voice or authority to publish their feminist thoughts to Twitter unless they were willing to shelter in their house out of genuine fear of reprisal.

The threat is real for women in Afghanistan, and it became all too real for the unnamed German gardener who nearly lost her life due to the migration policies put in place years before, and in which she had and has no say. The reality of life for women in Afghanistan is no secret, and it was not a secret when Germany took in over 250,00 people from the country.

OpenDemocracy, for example, writes the following:

Afghanistan’s entrenched traditional and customary practices constitute one of the strongest sources of violence. One of the most esteemed values in Afghanistan is namus. Namus is that which is defended for “honour” to be upheld—as distinct from behaviour which might be deemed honourable, such as showing hospitality. If someone is held to have offended the rules of a gendered order, then it is claimed there is reason to act to protect one’s namus.

Almost every woman in Afghanistan is hidden and isolated from the outside world.

There have been thousands of cases where women have been physically tortured, beaten severely, brutally mutilated, burned alive or had acid thrown at them—as well as being forced to marry at a very early age, raped or sold into prostitution, with many engaging in self-immolation as a result—and all in the name of namus. Women in Afghanistan, as in other tribal societies, are considered bearers of the “honour” of the family and bound within the associated chains of what is held to be sanctity.

In other words, attacks on women are not a bug of Afghan society, but a feature, in the same way that systematic sexual assault against children is not a bug there, but a feature. The type of random attack on women seen in the stabbing of a gardener in Germany, along with other sexual assaults and violent crimes recorded in Germany, is not rare in Afghan society — and, increasingly, not rare in German society either. According to German statistics, Afghans are 500 percent more likely to commit a criminal offense than native Germans are. In terms of sexual assaults, the numbers are even worse, with Afghans 12,000 percent more likely to commit a sexual assault than the rest of society.

A Radio Free Europe report which described frequent acid attacks and violence against women in the country, reported the case of one acid attack victim who was willing to speak with the BBC, which has startling parallels with a number of attacks involving Afghans in Germany.

A woman and two girls were targeted [last week] in a central district of Kabul by an unknown attacker who poured acid on them.

One of the victims, Nafiseh Nouri, was quoted by the BBC as saying a man targeted her and her relatives while they were returning home.

“An individual came from the other side of the street, he threw acid at my face, then he threw acid on the face and hands of my girls,” she said.

Nouri said she believes she was targeted simply because she is a woman.

As for Germany? An Afghan father and his two sons stabbed a man 90 times in what they called an honor killing. Last month, two Afghans murdered their sister because she did not live “according to their values“. In a similar case, a teenage Afghan migrant stabbed his sister 20 times for, again, not living according to his values. She later died in the hospital. An Afghan man stabbed his wife in front of a bus full of schoolchildren in 2020, with the man stating during the trial that his wife was his personal property that he could do what he wanted to. An Afghan is believed to have stabbed a woman who converted from Islam to Christianity in the Bavarian town of Prien. Child marriage, which was once unheard of in Germany, has also grown exponentially, with Afghans, along with other Middle East group, responsible for the phenomenon. Although acid attacks are exceedingly rare in Germany, in the UK, where they are commonplace, Afghans, along with Pakistanis, are often involved.

The power of the ‘r-word’

The question then arises. Why is there no plethora of commentary pieces questioning why the integration process failed so spectacularly in Germany, especially following a case like the attempted murder of the gardener in Berlin?

Some are afraid to point to the case over being called racist, while others are afraid to call out any case that highlights the patriarchal culture of the Middle East for fear that it will cause a backlash that could lend support to anti-immigration policies or parties like the Alternative for Germany (AfD). It is the same reason that the police in Cologne refused to report the full scale nature of the mass sexual assaults and rapes on New Year’s Eve on 2015 in which over 1,400 women were sexually assaulted and raped by Middle Eastern men and North Africans.

It is the same reason the police in Britain looked the other way as thousands of Pakistani men groomed predominately White children across multiple cities.

It is the same reason that activists consistently tried to delay the recently released Swedish police report showing that ethnic minorities in Sweden are far more likely to commit sexual assault, murder and other serious crimes than Swedes.

All of these events point to a reality that the West is entirely unwilling to acknowledge because it does not fit the prevailing narrative, one that most people increasingly accept as a religion. It is all because of the power of one word: “racist”.

As evidenced by the mass grooming cases in Britain, police are literally willing to allow rape to happen if it means aggressors aren’t called the “r-word”. Police forces are sworn to protect the citizenry and have state powers that enable them to do so. If they are swayed by the power of the word to such a degree, it is easy to see why the feminists of Twitter are so willing to overlook the most brutally anti-feminist cultures if those people happen to be Brown, Black or any other color other than White.

Still, the ideology of the left that believes all cultures are created equal and all peoples of the world want to live their life through the lens of liberal democracy is not helped by data or statistics that contradict that belief system.

An honest conversation in Austria

Austria’s media and political system has long taken a different view on these matters than their German or Swedish counterparts. For example, when a group of Afghan migrants gang-raped and murdered a 13-year-old girl, Leonie two months ago, it sparked a national outrage that reverberated across the political and media spectrum. It wasn’t the first time Afghan migrants have participated in gang rapes, either in Austria or Germany, but Austria’s government appears to be taking steps that match public outrage over the case.

The murder of Leonie has played a major role in Chancellor Sebastian Kurz’s rejection of his country taking in more Afghan evacuees following the Taliban takeover. The ÖVP-Green coalition government that rules in Vienna is making the case that a group that has been notoriously difficult to integrate, which already fills the youth prisons, and which has been implicated in serious crimes severely disproportionate to its population size, is not something Austrians want more of.

In Germany, no such discussion has been allowed to happen on a similar scale, especially with elections fast approaching, but as the country’s leaders push to accept 70,000 Afghan migrants, this discussion may be forced into the public arena regardless of feminists, academics, politicians and the media refusing to give it the attention it deserves.